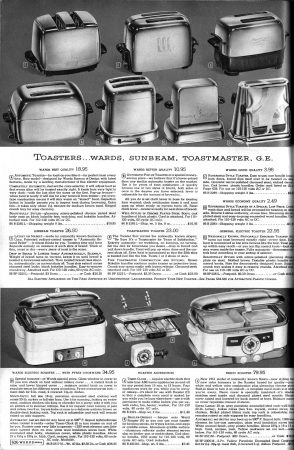 You wouldn’t remember this, but once upon a time banks used to give you a toaster when you opened a new bank account. Why a toaster? Well, why not? What else would you give? It was an era with a lot fewer gadgets.

As evidenced by this Montgomery Ward page from 1951, toasters were once kind of a big deal. After light bulbs, they were one of the early things electricity was universally good for (the first toaster was marketed in 1893).

The prices on this page look unremarkable – until you account for inflation since 1951. Then you discover that $23 Toastmaster model (Item F on the page) was selling for for over $220 dollars in today’s money. Good grief! I can go into Walmart today and buy a toaster for less than $22. Toaster values have fallen ten-fold since the 1950s. Although the modern pop-up toaster has roots dating back 100 years, there was a certain degree of clever gadgetry involved. Evidently technology costs have dropped in the most unexpected places. (Notice there are also two cheap toasters – simplistic models that toasted only one side of the bread at a time and depended on you to flip the bread manually.)

So maybe in 1951 pop-up toasters were terribly valuable devices. Perhaps banks once had vaults in which they hoarded toasters, bringing them out only for new customers in hopes of cementing a lifetime relationship. I do know that my parents had that exact Toastmaster model pictured – whether it was a bank gift, a wedding present, or a spending spree on my father’s part I haven idea. But I will say lasted forever – longer than their relationship with any bank.

By the way, Williams Sonoma will sell you a really expensive ($1000) toaster if you want one. Is it the greatest thing since sliced bread? I suspect that $22 Walmart can burn Wonder bread with the best of them. 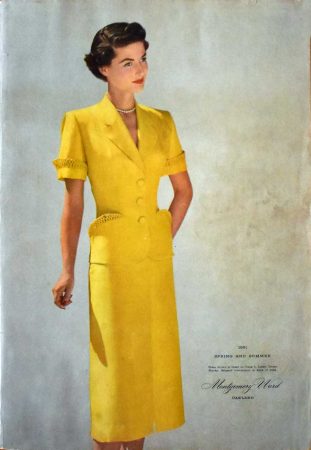