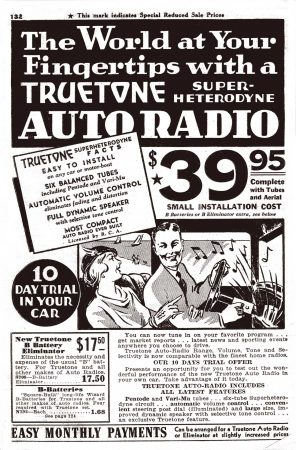 These days we worry about texting causing crashes – in 1932 it looks like tuning a radio could have the same effect, if this illustration is anything to go by. On closer inspection, they may have just parked on the beach to have a listen…but if so, why is he wearing a suit and tie?

Maybe he was dressed up because he was well off in the midst of the Depression. Notice that this $40 (on sale!) radio could be purchased in an installment plan – an option that becomes more sensible when you consider that $40 dollars in 1932 is equal to over $660 dollars today. And if you wanted to do things properly, you would also buy the “B Battery Eliminator”…because early tube radios required two sets of batteries, and the car normally only provided one voltage. Radio and battery convertor together would raise the price to nearly $1000 these days. Hence also the inducement of the ten day free trial. 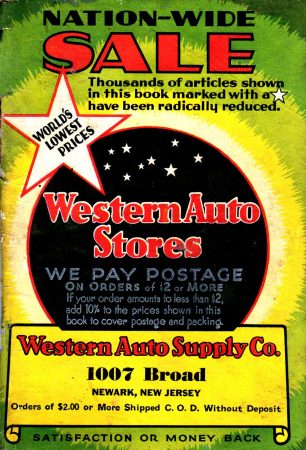 But just look how happy you and your girl would be!

Western Auto was another one of those once-dominant companies whose story ended by a succession of mergers and changing times. Started in Kansas City in 1909 as the auto industry was exploding, at one time it had 1200 stores across the US, but was gone by 2004.