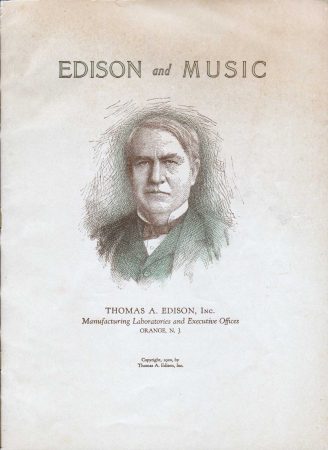 Thomas Edison invented recorded music in 1878 to instant acclaim. Over 30 years later, after also developing a few other useful items like electric light and moving pictures, he decided to see if he could improve upon his phonograph. The result was indeed the best sound recording system of it’s day – the “Diamond Disc.”

Now all he had to do was sell it.

It’s tempting not to call these 30 pages a catalog, as there aren’t even any prices. But then, if you had to ask the price of an Edison-branded Diamond Disc phonograph, maybe you couldn’t afford it. Diamond Disc phonographs were marketed as unabashedly high-end products. This catalog extols in page after page of effusive prose just how magnificent they are — equal parts technology, fine recorded classical musicians, and cabinets in styles and finishes to fit into the most upmarket of mansions. 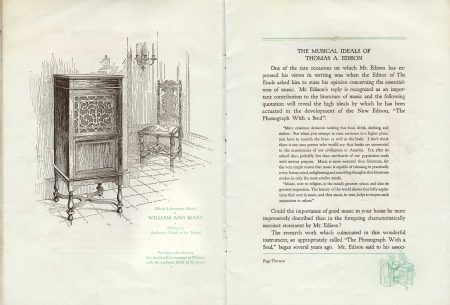 It’s funny, selling a product whose end result is music with nothing but words. But Edison’s writers gave it their best shot, playing off the genius inventor’s acknowledged history to assure the reader that this was phonographic perfection, and nothing less would do where music is involved. “Edison snares the soul of music.” They did their best to make the words sing.

If only Thomas Edison wasn’t pretty much stone deaf by this time. If only he didn’t have such weak, antiquated taste in music. If only he had noticed that 2nd-rate classical artists were being outsold by the popular music and the new jazz sounds. If only the Diamond Disc records weren’t heavy, bulky, and incompatible with every other record player on the market. Still, “The genius of Mr. Edison, his indefatigable labors and lavish expenditure of money in research work and experiments, have produced…The Phonograph with a Soul.”…and how can you refuse?