Coming up with names for products is always a challenge. Just ask car makers. From Henry Ford’s Model “T” to a Nissan Sentra, you have to find something catchy, something different, something appropriate, something fresh. (OK, there is also the Tesla Model “X” – maybe we haven’t advanced much.)

But not just cars. What do you name a bathtub? 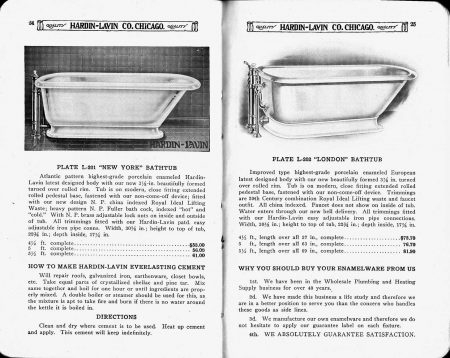 In this 1923 Hardin-Lavin plumber’s catalog, they named their tubs after great cities. There was the Venice. The New York. The London. Could you do any better?

Venice – makes sense. Lots of water in Venice, canals even.

But why London? Yes, it’s a major English city, but it’s not the English city actually famous for ancient Roman waterworks – so much so that the town was actually named after the facilities. That would be Bath. As in Bath…Tub. Gee, they coulda trademarked that! 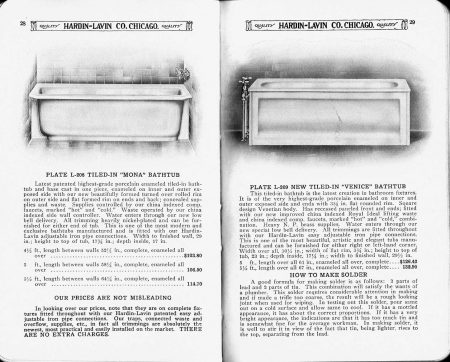 Well, London does sit on the Thames, a pretty important waterway. Which explains why their next (ahem) Bath-tub was named the St. Louis, thanks to the Mighty Mississippi river.

But then their naming system falls apart, as other tubs in the catalog get called the Mona, the Etruscan and the Edeen. The Edeen? Where or what is that? They could have kept going: perhaps the Alexandria (Egypt) or the Moscow, which offers cold water only. 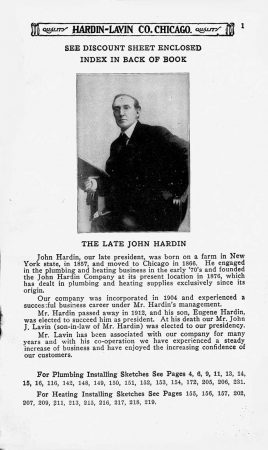 Still, the models they do have are clearly illustrated and lovingly described (at least if you’re a plumber), and the the pages are also filled with tips, tricks, and advice. This paperback-sized 240 catalog was as much a reference work as a product guide, intended to be saved and revisited.

While the founder had died 10 years before this catalog came out, he still received a whole page devoted to him- the “late John Hardin”. The Hardin-Lavin company which he founded survived at least until the early 1990s before it finally went down the drain. 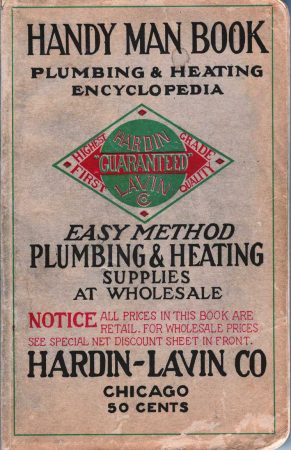