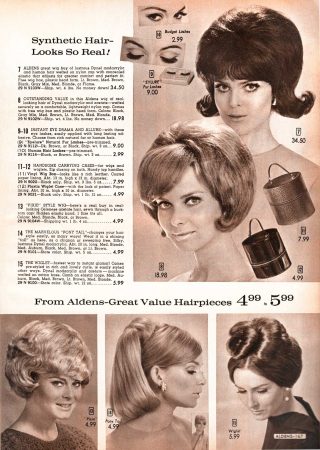 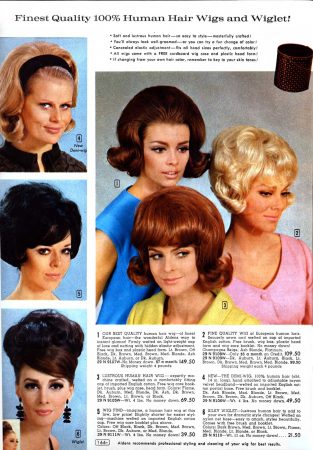 For most of the 20th century, women’s hats were a major fashion statement. We’ve shown off various styles in different decades: here and here for example. But suddenly in the 1960s, hats started fading from the pages of catalogs. Why?

Or – judging from this 1966 Aldens catalog – women’s wigs. Some serious mid-60s big-hair bouffantry going on here. These are tall enough to make the models vaguely resemble brainy aliens from a cheap sci-fi planet. A couple of the brunettes are trying to mesmerize me with hypnotic alien stares. Others look like they are under the mind-control spell of some evil being.

No, there’s certainly no benefit to adding a hat to all this hair. That would just look…silly.

On the other hand, perhaps these wigs are wildly practical. You could hide a lot of stuff under that hair done – food, drugs, transistor radios… Heck, even the “wiglets” would require you to duck through doorways, and the carrying cases are over a foot tall.

Some of the wigs are synthetic (made of “Dynel modacrylic” and acetate) while the pricier ones are real human hair — “European hair”, in case the purchaser was worried about unfortunate foreign influences. Which is a silly concern, if you’re going to end up looking like one of Dr Evil’s fembots.

Aldens was originally the Chicago Mail Order company – we’ve seen some of their pages before. By the late 1940s, when they changed their company name to Aldens, they were the fourth-lrgest mail order company in the country. 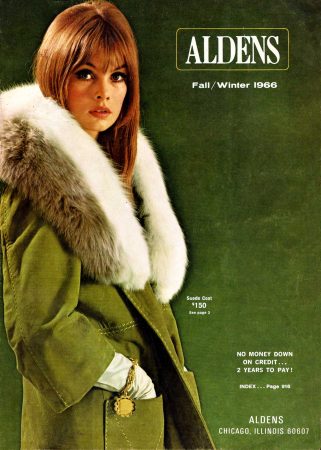