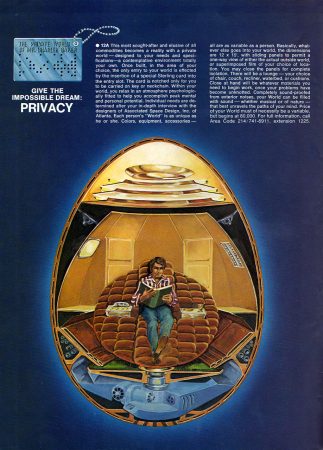 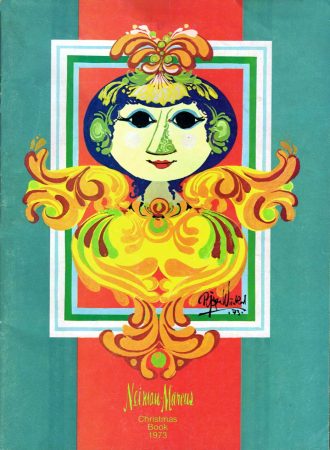 The phrase “Information Overload” wasn’t really a thing when Neiman-Marcus put out their 1973 Christmas catalog. But it was still possible to feel stressed by the increasing speed of life and the multitasking (another word which wasn’t common currency) demands put on us. So N-M commissioned a retreat, an egg, a cocoon that you could escape into and gain absolute privacy. They called it a “World” and you could have it appointed to your own specifications with music, a waterbed, windows or not, however you saw fit. Even in 1973, Neiman-Marcus considered that the gift of privacy was the impossible dream. Definitely a curious dream from the future, it’s not clear how many Worlds– if any — Neiman-Marcus sold.

Ironically, towards the back of that same Christmas catalog were products that also glimpsed the same future vision – and attacked the very Privacy that the $80,000 “World” promised. A page of electronic gadgets including  scientific calculators, privacy-piercing night-vision scopes, personal-sized (for 1973) color TVs, and a comical-looking “radio-telephone” with old-school dial. The very concept of cellular phones had just been announced in 1973, and this $2000 contraption was an older marriage of radio set and telephone, trying to meet a need that most people didn’t yet know they had – and which we now couldn’t imagine our lives without – privacy or not. Brave new world, indeed.

P.S. The company that would craft your personal World was “Associated Space Design” out of Atlanta. Founded in 1963, they’re still very much in business, which proves that the World may have been way-out, the company was grounded.