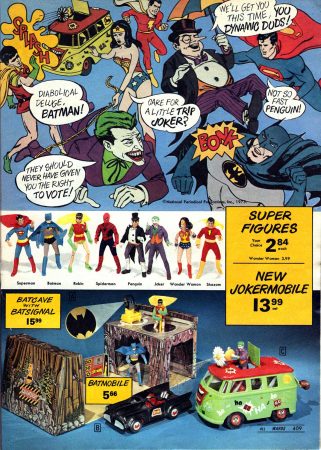 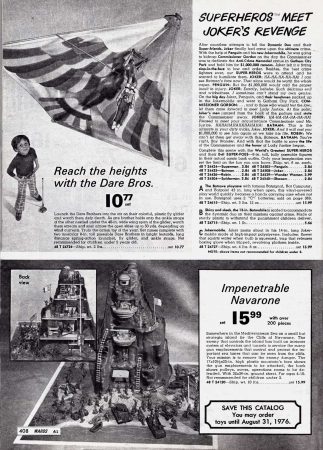 World-spanning superhero stories, with multiple heroes teaming up against havoc-wreaking villains, may have peaked in 2019 with the culmination of Marvel’s Avengers series, but the roots go back a long way. (Superman partnered with Batman in 1940s radio adventures!) For Christmas 1975, Montgomery Ward released a set of DC action figures and a vague plot to go with it in hopes that parents would buy all eight dolls for the holidays…plus the Batcave, Batmobile, and Jokermobile. “Jokermobile?” An old VW bus — seriously?

1975 was a fairly low point in comics’ influence on pop culture; well after the Batman TV phenomenon and before the Superman movies arrived. So if superheroes weren’t Junior’s thing, then perhaps he could go with the “Dare Brothers” , action figures “in bright leotards” who could be clipped to a glider kite. Or he might engage with the rather retro “Navarone” play set – with over 200 extremely plastic pieces, it was a real value at $15.99 (just 8 cents per piece)!

Nahh…the 43″ Batcave with Bat-Signal and “Bat-Computor” is more substantial. The big question on these pages is, why was Wonder Woman priced at $3.99 when all the male figures — heroes and villains alike — were $2.84? Riddle me that!

Actually, the answer might be found in TV Guide. Wonder Woman was launched as a TV series in the fall of 1975 and gained enough traction that perhaps she could command a premium price. You go, girl! 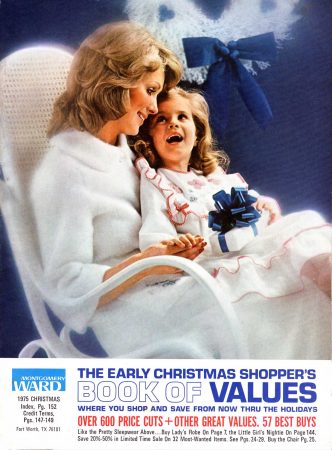