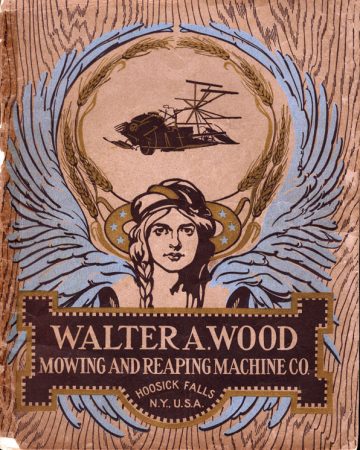 Look at that monstrous factory. It’s a classic example of successful American industry: The Walter A. Wood Mowing and Reaping Machine Company, situated on the banks of Hoosick River in New York state.

This etching exaggerates the scale only a little. By the late 1800s, W. A. Wood was the largest farm implement company in America. They employed several thousand men in buildings hundreds of feet long, churning out tens of thousands of prize-winning farming machines yearly for sale across America and Europe. 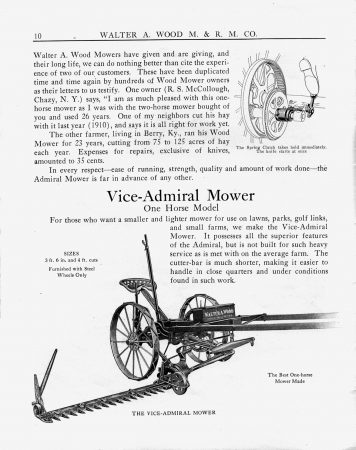 This particular Woods catalog was produced in 1912 — but the etching on an inside page looks suspiciously like it was created much earlier (The railroad engines, for example). Because in 1912 William Wood was dead 20 years and the factory was on the decline.

Their products were still solid. The “Vice Admiral” mower could cut down a four-foot swath of grass with only one horse to power it. And the “New Century Binder”, although it looks a bit like a mad inventor’s failed flying machine, could gather up the mowed hay and automatically tie it into neat bundles. Two horses required for this operation. 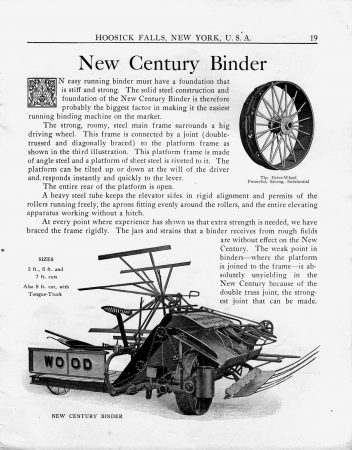 But by 1912 a new kind of horsepower was gaining popularity. Giant firms formed from mergers, like International Harvester, were taking away business. And a World War was shortly to break out and destroy Woods’ lucrative foreign markets. By 1924, Walter A Woods Mowing and Reaping — once a shining example of American ingenuity — was shuttered after 7 decades.

If you visit Hoosick Falls today (in person or via Google Maps) at the bend in the river where the great plants once stood there’s not a trace of them. Instead you’ll find a Japanese company making “world class electro-deposited performance copper foils for electronic interconnect (printed circuit board) applications.”

Walter Wood farming implements reside in a room in the local history museum. 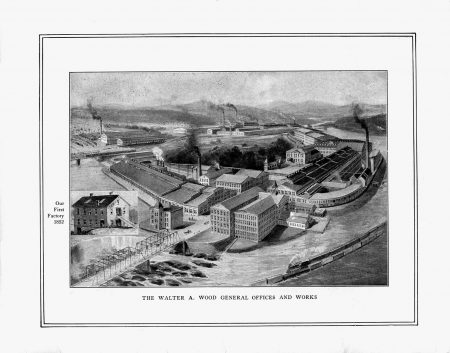