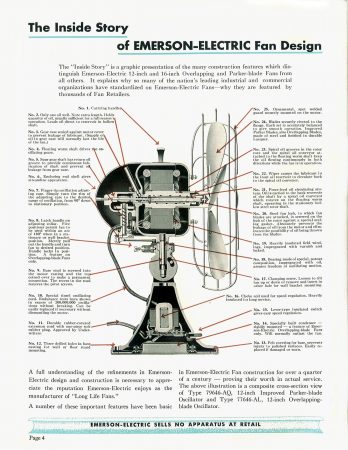 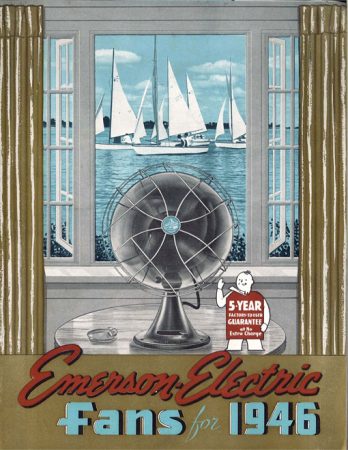 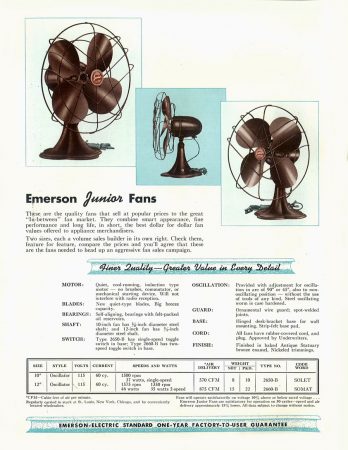 Summer’s around the corner, and in parts of the country temperature records are already being set. Of course, we can manage, thanks to thermostatically-controlled air conditioning in every building and car.

But Air Conditioning, especially in homes, wasn’t a major product until well after World War II. For the first half of the 20th century, the best you could do to beat the heat was with was a fan. This Emerson catalog was full of them from giant ceiling fans and industrial factory jobs, to large floor models for businesses, to oscillating models for living rooms and even smaller, simpler fans like this page of “SSS” fans, all designed to make the heat more manageable by adding a breeze. (I have one almost exactly like this in my garage)

Yes, you can still buy a room fan today, usually of remarkably lightweight plastic. The blades won’t slice your fingers off like the old fans threatened to. (If you buy a Dyson fans, there seem to be no blades at all). Still, there’s something classic about these older fans, imposing in their black heavyweight metal enclosures, which commands respects and turns some people into collectors… and, well… fans.