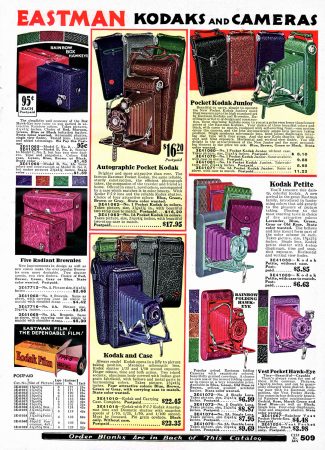 Once upon a time, and for a very long period of time, you could use the word “Kodak” as either a noun or a verb and folks knew exactly what you meant. That’s how ubiquitous the brand was in the days of analog, film-based photography.

While we live in a world where with any mobile phone can produce a picture at the touch of a button, Kodak was the first to understand the power in their slogan “You push the button, we do the rest.”

In 1931, at height of the Great Depression, this pageful of cameras is a riot of color. One suspects Kodak was trying to drum up fresh business by offering familiar cameras in flashy colors instead of the usual dark black. It’s not clear the gimmick worked – colorful Kodaks are fairly hard to find today.

Also worth remembering that though the cameras were colorful, the film was strictly black & white. Color home photography didn’t come along for a few more years. 1931 was the last year for the clever “Autographic” Kodaks, which let you write a note along with the photo – an early form of metadata. (1931 was also the last year for Kodak’s founder George Eastman, who took his life in March of 1932.)

In any case, it’s a vibrant, color page layout. Worthy of a picture. Which we shot – digitally.