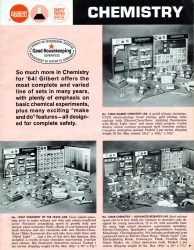 For the budding scientist, 6 feet of chemistry experiments! Not a toy in sync with today’s youth, it’s quite nerdy, encouraging experiments in Electro-Chemistry, Qualitative and Quantitative Analysis, Metallurgy and Chromatography. Oh boy, what fun!

Alfred Carlton Gilbert had been building Erector Sets, American Flyer trains, and scientific toys since the early 20th century. By 1964, however, times were changing: Mr. Gilbert had died three years previously and the company itself would go out of business three years later. Chemistry in the early 1960s was becoming both suspect and regulated. Kid’s chemistry sets prior to 1960 might include things like corrosive chemicals, and would let you  make cyanide and chlorine gas. One infamous set from 1951 even let you work with radioactive atomic isotopes! (Under adult supervision, one would hope.) 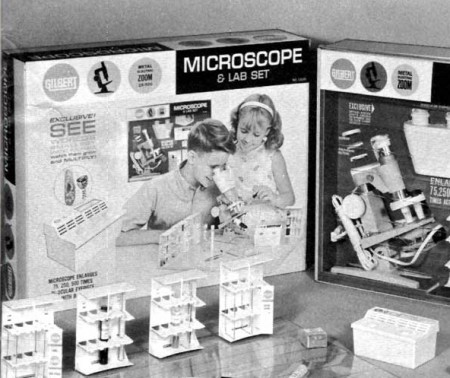 By ’64, “non-explosive” and “non-toxic” chemicals were being featured. Note the Safety Tested and Good Housekeeping seals. Making the chemistry sets safer unfortunately also made them less fun.

These were boy’s toys, unquestionably. Look at the box art and you’ll see that girls are usually only seen looking on in wonder and admiration as their brother manipulates the complex microscopes. Just another way things have changed.