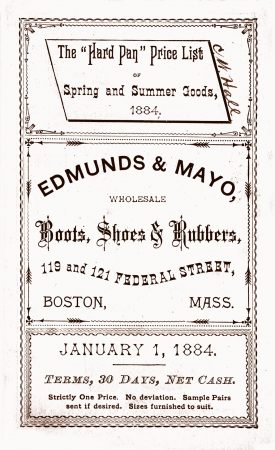 Step back 130+ years ago and catalogs were just becoming a widespread business tool (and not quite yet a household staple). Here’s one of the really early ones: a wholesale “Hard Pan Price List” of boots and rubbers from the Boston-based firm of Edmunds & Mayo.

You have to admire the exuberant Victorian typography on the cover, with fonts that remind me of Wild West posters. Not much in the way of imagery, though. it looks like Mr. C.M. Hall, who wrote his name onto the cover of this 3×5 pamphlet, also inked in some tiny checkmarks on the inside pages, next to items he intends to purchase for his store. 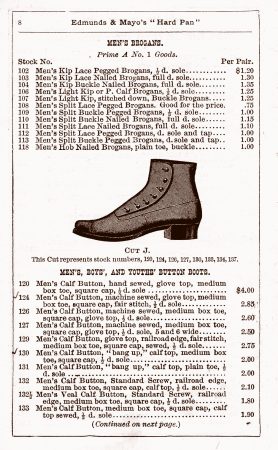 I did some checking on the company. Edmunds started in the business in 1862, joined with William F. Mayo in 1872 and dissolved the partnership in  1893. Mr. Mayo continued the business and was a great believer in his little catalogs, printing as many as 70,000 a year. His version of the firm survived into at least the 2nd decade of the 20th century, advertising itself as the “largest wholesale rubber footwear house in the world” in 1912.