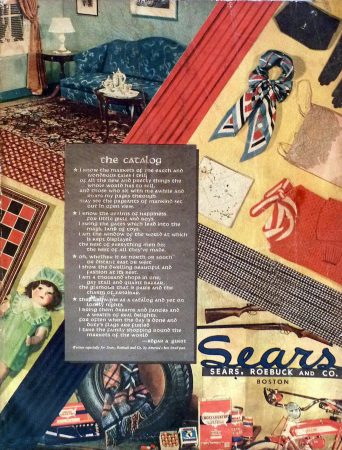 And so Sears Roebuck came to him in 1933 to pay him to praise the mail order catalog.  And they proudly posted the result on the cover of their own catalog that year:

I know the markets of the earth and wondrous tales I tell
of all the new and pretty things the whole world has to sell.
And those how sit with me awhile and roam my pages through
may see the pageants of mankind set out in open view.

I know the realms of happiness for little girls and boys
I swing the gates which lead into the magic land of toys
I am the window of the world at which is kept displayed
the best of everything men do; the best of all they’ve made.

Oh whether it be north or south or distant east or west
I show the dwelling beautiful and fashion at it’s best.
I am a thousand ships in one; gay stall and quaint bazaar,
the glamour that is Paris and the charm of Zanzibar.

They know me as a catalog and yet on lonely nights
I bring them dreams and fancies and a wealth of real delights.
For often when the day is done and duty’s flags are furled
I take the family shopping round the markets of the world.

These people took their business seriously.