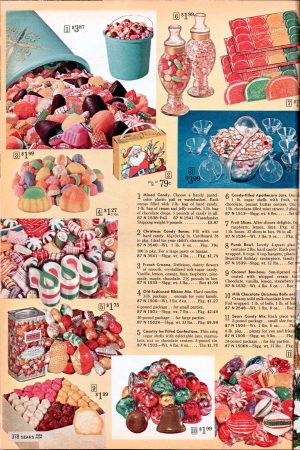 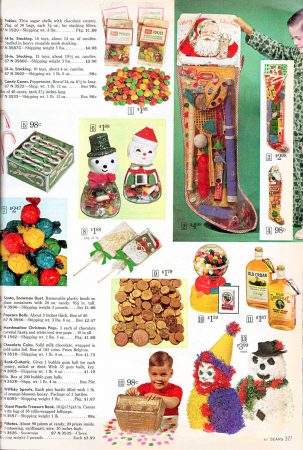 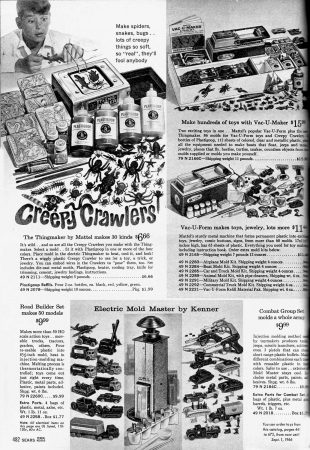 What the heck ARE Sugarplums, anyway? I guess I always assumed they were some early 19th-century delicacy now long behind us. But no, a sugarplum (and the word goes back to at least 1609) is basically a hard sugar candy – a boiled sweet, as the English call them — quite possibly with a nut or bit of fruit peel in the middle. M&Ms with Peanuts and Jordan Almonds are honorary sugarplums.

There are other candidates on these 1965 Sears Wishbook pages – a cornucopia of 1960s Christmas Candy treats. The one that stands out for me, from some childhood memory no doubt, is the ribbon candy, which was prettier to look at than it was practical to eat. A lot of these were the kind of fussy candy adults seemed to like to leave out for the holidays. Chocolate coins were nice, on the other hand — if messy to unwrap. And the Gumball machine was like getting a toy AND a treat in one. But then there is a positively creepy monkey-clown piñata, and mock whiskey bottles filled with honey. Oh yeah, that will set a good example for the kids.

I would have flipped right past the confections in favor of the pages ad pages of toys. In fact I still did that when selecting pages for this post. I stopped when I came to this page of Kenner and Mattel products. The Creepy-Crawler Thingmaker! The Vac-U-Form! The Electric Mold Master! These were coveted toys in the ’60s. Fairly seriously boy-oriented in 1965, although the Thingmaker was repurposed a few years later with girlie models that could make rubbery flowers…my sister claimed one of these. Me, I made spiders.

Unlike sugarplums, these awesome toys are a thing of the past. They could no longer be sold in this form today, because there they involved 110 volt current, and heating elements, and all sorts of dangerous steps. One wonders how kids ever survived. 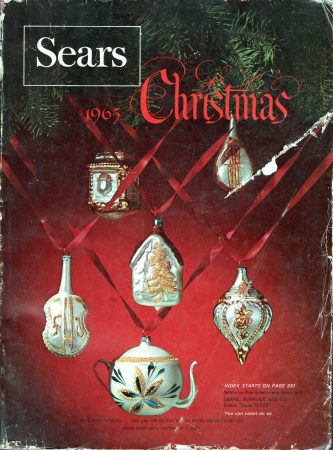