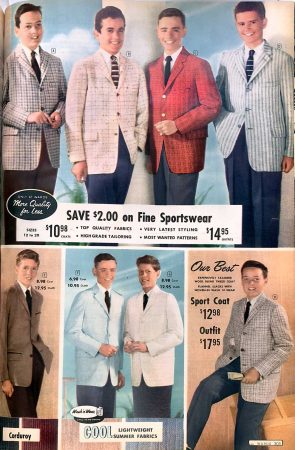 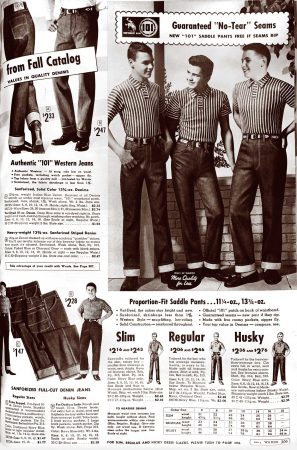 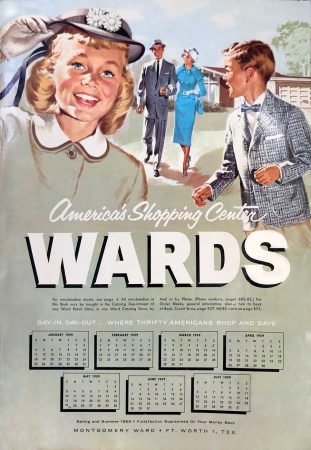 Seen from the distance of decades, vintage fashion alternates waves of chic and hopelessness. Here’s one of the latter. Granted, you can find fans for every past fashion style, and the gaudiest excess can have its charms. But what’s going on with these boys’ outfits? Based on these pages, 1959 may well have the dorkiest era of the 20th century for boys clothes — certainly the most awkward since Buster Brown and sailor suits of the century’s first decade.

Granted, these feature a large number of Easter outfits (as does baby sister’s bonnet on the front cover of this catalog for “America’s Shopping Center.”) And granted, these were aspirational, not every day wear. But really – pink and red sportcoats? Did families feel a sudden need to compete with new color TV sets? Is that why one of the models looks like a dead ringer for Beaver Cleaver from the old TV sitcom? (Dads weren’t much better – see below.) And another question – why is this called “sportswear?” Is someone going to play baseball while wearing this?

No wonder that boys of that era preferred to express themselves in white t-shirts and jeans (think “West Side Story”). But while jeans ARE found a few pages later in the catalog, their are paired with striped tops which will immediately remind older readers of the singing Beach Boys or even their antecedents, the Kingston Trio. Note the three sizes – from Slim for the “rangy boy” to Husky. Six decades later, “Slim” looks nearly anorexic and “Husky” is hardly remarkable. Fashion eras may come and go in waves, but it seems our overal waistlines are always expanding.