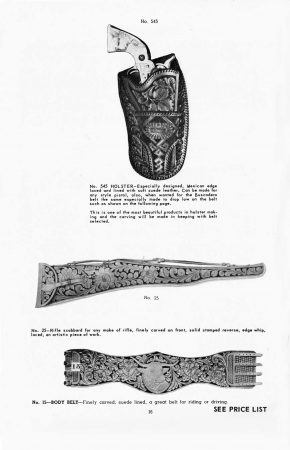 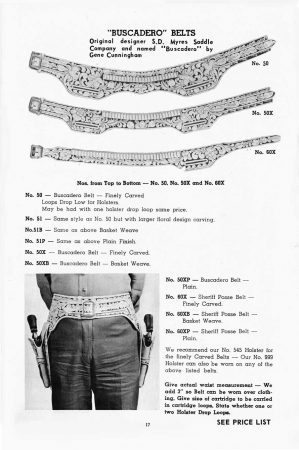 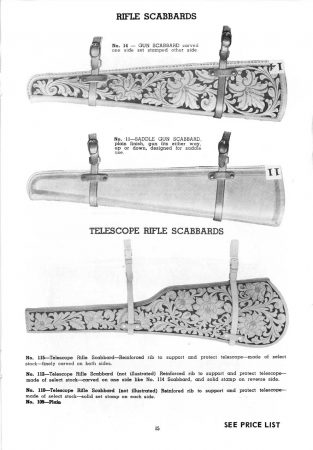 It doesn't really make sense for a cowboy – or a policeman – to use a finely hand-tooled leather holster or belt in their daily work. Plain leather would get the job done and could safely suffer wear and get scuffed up.

But then there are other times – times to show off; times to take pride in your work and your tools. At such moments these beautifully-carved items let you show off, and how.

Starting from simple origins in Texas in the late 1800s, the S. D. Myres Saddle Company became famous for quality carved leather goods like these. Many Western actors including Gene Autry and John Wayne used S. D. Myres saddles and gun leather. And what was good enough for Hollywood was good enough for real-life lawmen. What else is there to say? These exhibit awesome workmanship (click and zoom in on the details), and prices are reasonable for the time period and the effort involved – $45 for the “545” holster, for example.

While this catalog came with a price list dated 1972, the catalog itself looks like it could have been designed many years earlier, with just new prices inserted. It's not clear when the S. D. Myres company closed down. Samuel Myres died in 1953, but his son continued the business. The internet would tell you the company folded in 1969, but this catalog says otherwise. Regardless, craftsmanship like this endures forever. 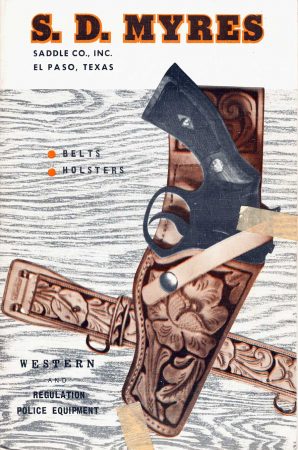