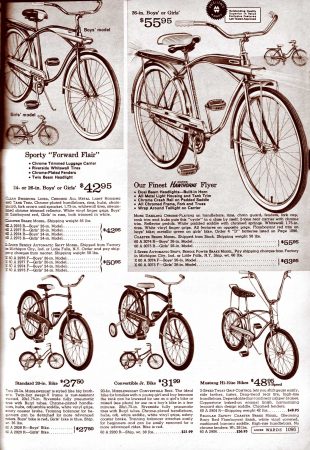 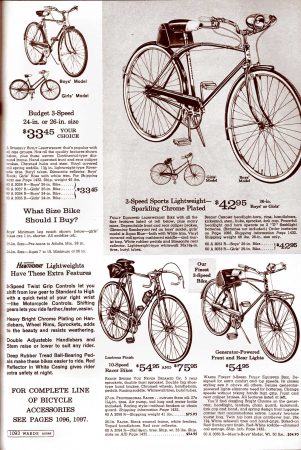 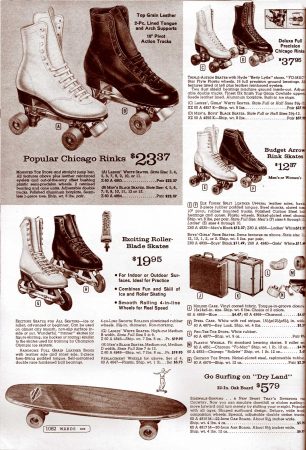 The Beach Boys were singing about cars in 1964 and 1965, but there where plenty of other personal transport options rolling out.

Bicycles were still pretty basic. Montgomery Ward had been selling “Hawthorne” brand bikes since the late 19th century and generally speaking, bicycles were bicycles. In 1965 training wheels and dual-beam headlights were selling points, although the “Mustang hi-rise” spyder bike with the banana seat looks pretty flashy and mod.

3-speed and 10-speed bikes were clearly for fancy folks and serious riders. Most of us only  pedaled at one speed anyway. Hybrids, BMX, mountain bikes, recumbents, folding bikes and other variations were all decades in the future.

For smaller wheels there were roller skates, in white for the gals and black for guys. They look ready for the roller derby or the local rink. Click on the page at right for a more detailed view.

It's a surprise to find an early version of rollerblade inline skates pictured, immediately recognizable with their “plasticized rubber wheels” and even called by that name. Rollerblades – the company and the brand name – wouldn't gain traction until the early 1980s.

Finally, there's the skateboard, a new sensation that's “sweeping the country”. Such a new sensation, in fact, that it wasn't yet called a skateboard. It's listed as “Sidewalk-Surfing” although the writeup then confusingly compares it to downhill and slalom skiing. Popular with all ages, which makes one wonder – why did the Beach Boys never write a skateboard song? “Sidewalk Surfin' Safari” would have been a megahit, surely. 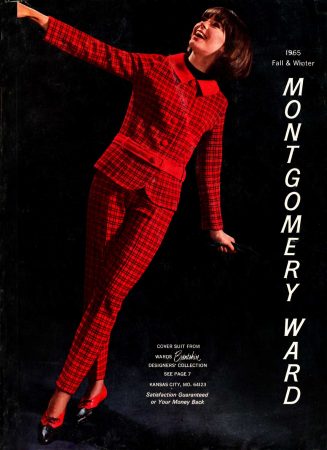