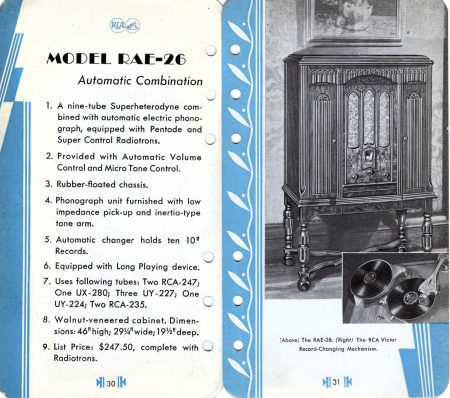 Even in this digital age, vinyl records continue to appeal, both for their sound quality and the delight in their sheer physicality – a 12-inch disc in a colorful cardboard sleeve with liner notes and musical information.

Audiophiles know how the 33 RPM long-playing “LP” was introduced in the late 1940s as a vast improvement upon the easily-broken, short-playing, noisy shellac 78rpm discs which preceded them – and recorded music was never the same. What almost no one knows is there were long-playing vinyl records long before then. Way back at the end of 1931, RCA Victor introduced LPs to great fanfare. And they were a flop.

Not for a lack of trying. These art-deco-rated pages from the 1932 RCA dealer catalog of radios and phonographs introduced the “Musical Sensation of the Year” – records that allowed you at last listen to an entire movement of a symphony without interruption. No less a celebrity than Leopold Stokowski – the most famous conductor in the world at the time – recorded RCA’s first long-playing discs. So did folks like Duke Ellington and Paul Whiteman. 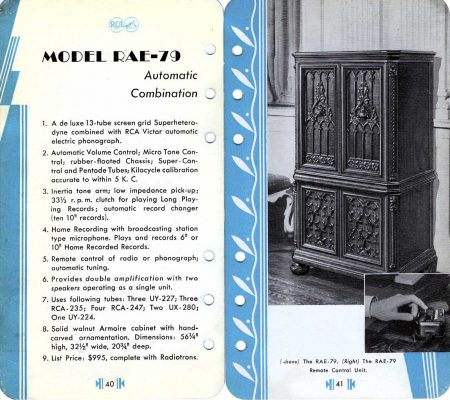 There were just one or two teensy little problems.

First, these delicate vinyl records were no match for that gigantic, painfully heavy tonearm with the steel needle that also played thick 78s. The discs scratched easily and wore out quickly. Second, 1931/1932 were the darkest years of the Great Depression, just when RCA placed a premium price on this new technology. Their top of the line radio-phonograph sold for $995 – perhaps $18,000 today. Few people were willing and able to drop that kind of money on a new gadget… even though it was an awesome piece of technology for the time. RCA’s top model had two amplifiers and two speakers to play the new long-playing records to their best advantage. It also included a record changer for 78s; it could RECORD directly onto special discs; and it even included a pioneering remote control (albeit one with a thick cable running back to the main set). Click to zoom in and see larger images.

On the other hand, listening to the radio in 1932 was FREE, and the shows never stopped. RCA only built just over 500 of that $1000 turntable to begin with. By the end of 1932 they were desperately trying to sell the remaining stocks at $142.50.

And that was the end of the first long playing home record. 16 years and one World War later, Columbia records tweaked the idea and tried again. Right time – right price – technology and the times had caught up with the idea and the LP is with us well into the 21st century. 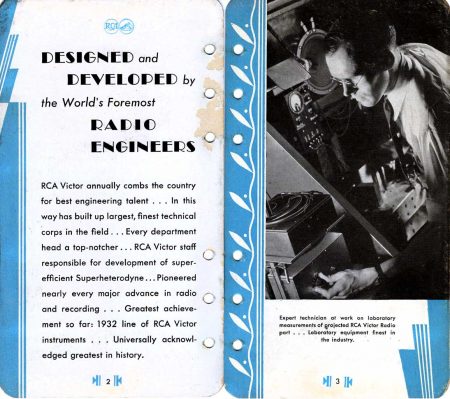