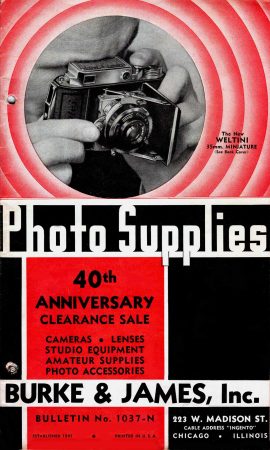 Leica is to cameras as Rolex is to watches: on balance, just about the most pricey, collectible camera line in the world. Expensive when new, still expensive decades later. 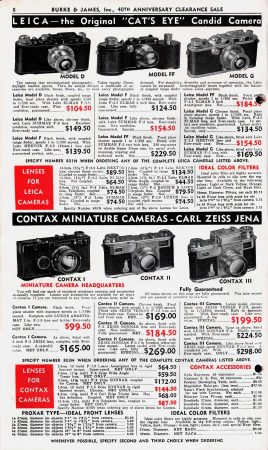 The Leica’s innovations still influence cameras today, even though photographic film itself is essentially dead and buried. Leica cameras were small for their day because they borrowed the 35mm film that movie cameras used instead of larger film rolls or glass plates. They were precision built from the lens to the shutter, since the negatives would be so much smaller. They offered interchangeable accessories, starting with lenses which could be twisted out and replaced for different degrees of zoom. Even today’s DSLR cameras use lenses based on the dimensions established by Leica’s 35mm film frame.

In 1937 that format was considered “miniature.” Hard to imagine by today’s standards, but then most cameras of the time had pull-out bellows and bulky backs, and used large films or plates. In comparison, Leicas were the GoPros of their day. 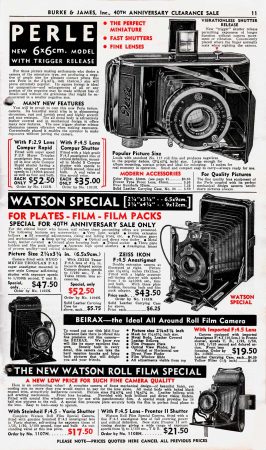 Burke & James started business in 1897 and closed in the early 1970s. On this page of the 1937 Burke & James catalog, the most valuable camera is the Leica Model FF which held enough film for 250 exposures (think about that for a moment – just how many pictures are on your iPhone?) Nowdays a Leica FF would be worth $4,600 – $12,000 depending on condition and lens.

But that’s nothing compared to the most expensive Leica: a prototype model from the 1920s. It sold last year at auction for just shy of 3 million dollars. Keep your eyes open on your next flea market visit.