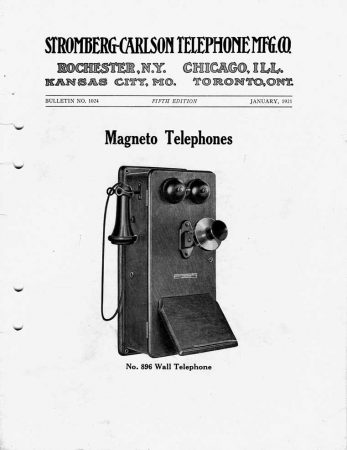 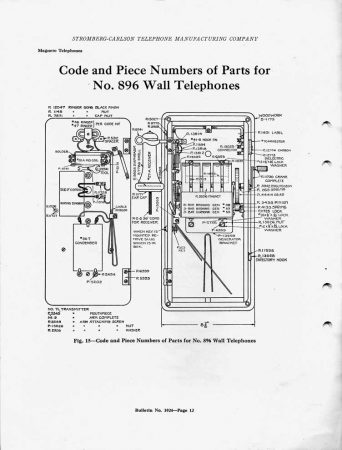 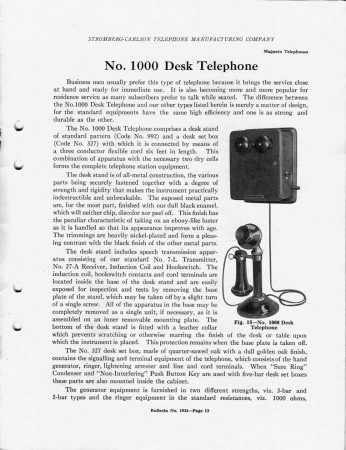 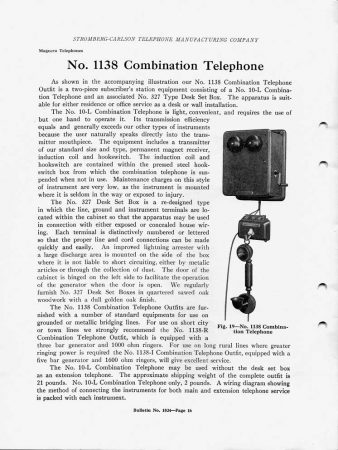 A long, long time ago, when you wanted to make a phone call you couldn’t dial the telephone number yourself. Actually, you haven’t really “dialed” a number in ages either – you’ve just touched in a number. Well, before touchscreens there were pushbuttons and before that there were actual dials. And before dials there were just magento cranks. Turn the crank and you generated a burst of a electricity sufficient to generate a signal in the phone company’s nearest office, where an operator would pick up, take your request, and make a connection to the other party. That was the way it was in 1894 when Alfred Stromberg and Androv Carlson started building telephones, and that was the way it was for most folks in 1921, when this catalog appeared.

Stromberg-Carlson went on for 11 pages (11 pages!) describing their basic Model 896 wall phone – where the batteries went; how well the crank was constructed; how it was shipped in a wooden crate; etc- ending with a detailed schematic seen here. They then devoted three pages to the Model 1000 desk phone, noting that “business men prefer this telephone because it brings the service close at hand and ready for immediate use. It is also more and more popular for residence service as many subscribers prefer to talk while seated.” (Imagine that.) And two pages were spent on a new combination phone that could be used “one-handed.”

Actually, in 1921 magneto phones were peaking and about to decline. Telephone systems in which you made calls yourself without requiring an operator were cropping up in progressive cities. It would take decades for this self-service direct dialing to spread across the country, as smaller towns didn’t get the necessary new equipment until the 1940s, 1950s or even later. There was evidently one hamlet in Maine which still had operators asking “Number, please?” until 1982!

Fortunately, Stromberg-Carlson also made automatic switching systems. The vestiges of the company and its technologies still exist today as part of a corporation called Ribbon Communications which offers “Secure Innovative Real-Time Communications Software Solutions from the Cloud or from Your Network.”

Yes, things have changed. But in a tribute to backwards compatibility, a 1921 Stromberg-Carlson phone can still be connected to a plain old telephone land line today and receive calls. You just can’t call out.

Well, that’s assuming you can even find a land line anymore. They’re almost as scarce as desk and wall phones.