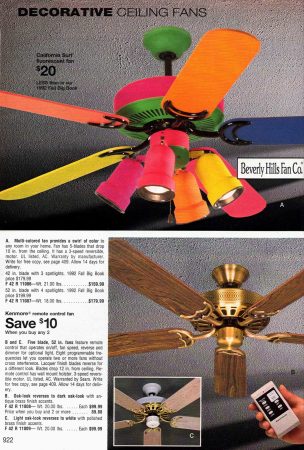 The final Sears Big Book (Spring/Summer 1993) coincided with a renaissance of that summer cooling standby, the ceiling fan. There was a virtual explosion of fan styles, some more successful than others. The copywriter for the “California Surf” fluorescent fan called it a “swirl of color” which is kinder than a “riot of color,” but I would riot if this was installed in my house. Clearly someone wanted to modernize the fussy typical ceiling fan (like the one directly under it). Clearly someone missed the mark. 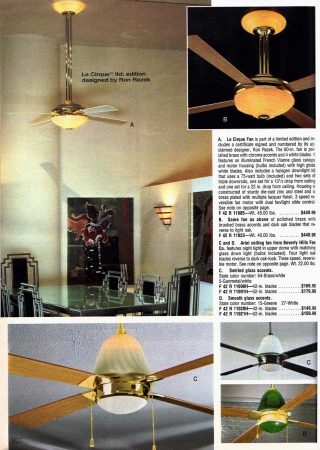 Meanwhile, the fans on the previous page managed to be both timely and timeless (and priced accordingly). The streamlined art deco look evokes the past but would also look good in a contemporary setting. Here, Sears had hired noted ceiling fan designer Ron Rezek and the results were no “swirl of color.” Instead, you received a limited edition signed and numbered certificate with each fan – very upscale indeed for Sears.