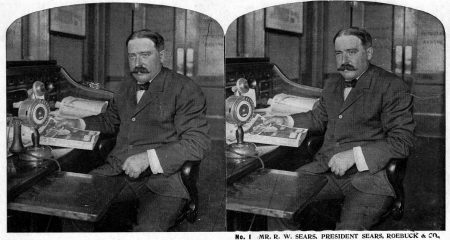 Rather that show you a page from a catalog, this time we have pictures of catalogs being created…back in 1906.

In that year, Sears Roebuck shot 50 stereoscope cards to show off the astonishing scope and scale of their enterprise, and sold them along with a stereoscope viewer for 50 cents starting in 1908. Stereoscope cards were 3D photos – a forerunner of the ViewMaster, and a sort of Victorian-era virtual-reality headset. They remained popular until motion pictures came along. 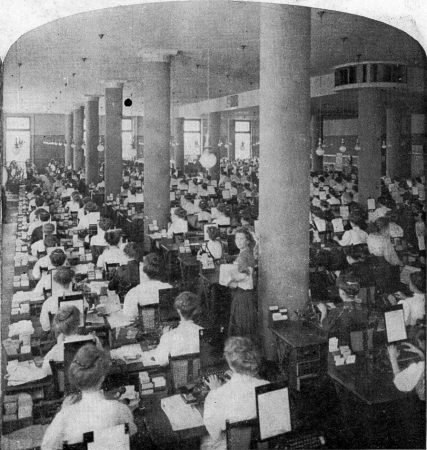 Card #1 is of Mr Richard Warren Sears himself. That’s a very early dial telephone on his desk – one of the first in the country. Sears had their own telephone exchange for internal calls and dials would have been more efficient. So much depended on efficiency. 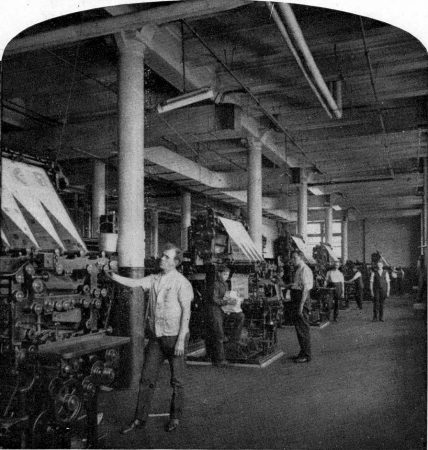 Card #23 is “Making a Record of the Customer’s Order” where as many as six hundred young women (and ONLY young women) processed every order entered… up to sixty thousand daily.

At least a half-dozen cards dealt with the catalogs themselves… #33 shows “Where the Big Catalogue is Printed” and #37 displays the “Catalogue Trimming Machines”. You can see 1906 catalogs at the bottom right, waiting to be finished and sent on to potential customers. 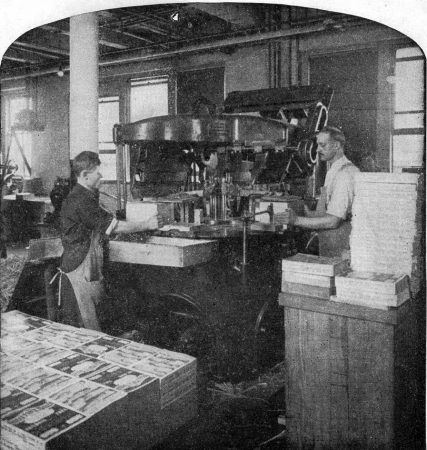 All in all it was an utterly massive operation. In this computerized online networked era it is hard to imagine how they pulled it off, but pull it off they did…utterly mechanically. Perhaps the effort contributed to Mr Sears’ early retirement in 1908 and death in 1914. He was only 50 years old.

2 thoughts on ““Where the Big Catalogue is Printed””