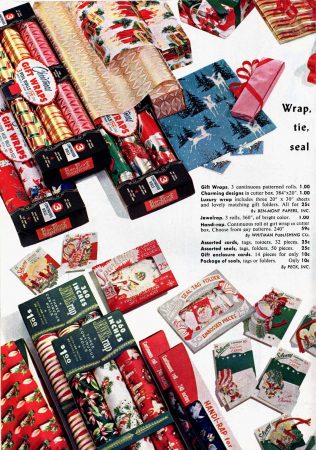 Christmas wrap, that is. And Christmas cards. And stocking stuffers, available from one of the 20th century’s great retailers, F. W. Woolworth.

Woolworth’s, being at heart a “five-and-dime store”, didn’t deal much with catalogs, but they were a gigantic retail force of retailing across America for many decades. Seemingly in every downtown in America you could find a Woolworth’s store, filled with everything you could need except fresh food. By Woolworth’s 100th anniversary in 1979, it had become the largest department store chain in the world, according to the Guinness Book of World Records. 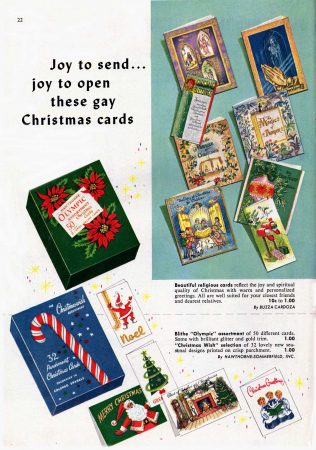 So here is some mid-century Woolworth’s Christmas wrapping, still looking sparkly after 60 years. And on another page here are “gay Christmas cards”, which are nothing like any “gay Christmas cards” you might find today. Such a nice word whose original meaning has been completely changed.

That’s not the only cultural change. I had planned to show just these two pages, but flipping through the 1957 catalog I found a page of stocking stuffers, featuring bubble gum cigarettes with real cigarette brand names. And not just packs, but an entire carton! Sure, that’s the stocking stuffer your kids want — a carton of candy cigarettes or cigars, just like their parents smoke! 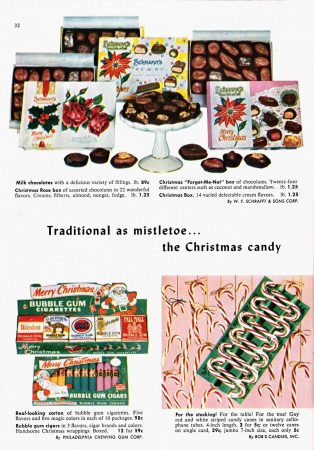 Yes, year after year, things do change. Woolworth’s closed up 21 years ago, beaten at its own game by late-20th-century competitors like Target and WalMart. Intriguingly its the parent company lives on…

You know them as “Foot Locker.”