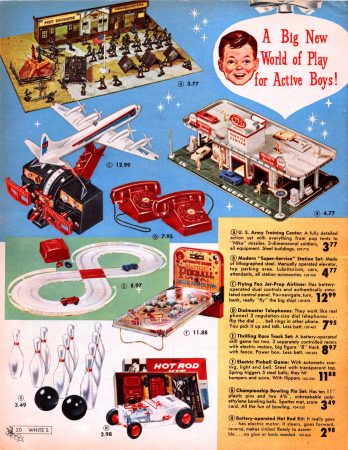 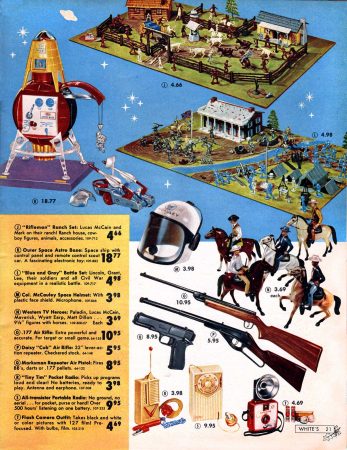 We saw previously what girls had to look forward under the tree at Christmas in 1961 — eight pages of toys that mimicked what their mothers did – mainly housework of all kinds.

In mid-century America, it seems the boys were considerably luckier. They got ten pages of toys aimed at at them, with a wide range of options. On the two pages seen here you could be an astronaut or a pilot, a bowler or racecar driver, a cowboy or a soldier, a photographer or, well…a gas station attendant (which WAS a thing, once.)

On the other pages there were chemistry sets, toy cars, model railroads, and guns. Lots and lots of guns. This was the moment in American TV culture when Westerns ruled the airwaves. You could buy a gun just like your favorite Western Hero used…or an entire Army Training Center…or a Civil War battle set…all pretty much unthinkable gifts in the current day.

So unlike girls, boys did have lots of career options in 1961. But they did face death.