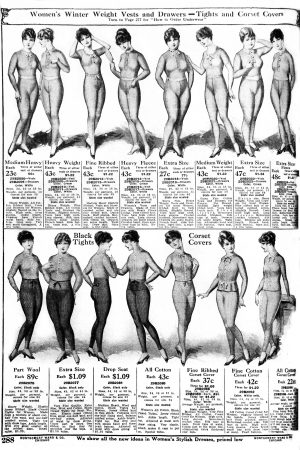 This is the first of five pages showing off women’s “Union Suits” that would keep Her warm during the cold winter months. It’s a page that reveals more about the female shape than was usually seen in public. I wonder if young men of 100 years ago would turn to inner pages of the Montgomery Wards catalog, like they later turned to National Geographic, and still later to Victoria’s Secret catalog, to gain insights into the female anatomy?

Still, this is closer to Queen Victoria that Victoria’s secret. After all, Her Majesty had only been dead 14 years, and the loose-moraled “Roaring 20s” were still one world war ahead. From this distance in time, these photoillustrations are rather charming, and about as titillating as Montgomery underware pages from 70 years later (which is to say, not terribly.)

Throughout the book, one can’t help but notice how cautious and pragmatic the copy is. There’s no hyperbole in the sales. Clothes are described as “very serviceable” and “worth-while values”, “dependable” and “moderately priced.” There’s an austere midwestern sensibility here – no suggestive selling. Instead, line up 15 ladies (including a few “extra size” – so not a new thing) and let Madame decide what wool she’ll wear this winter.

Apologies for the slightly wobbly image – this especially old catalog hails from a time when paper was cheap and the 9″ x 13″ oversize pages won’t fit in my scanner. So I had to haul out the camera, take a photo, and try to make adjustments in Photoshop.