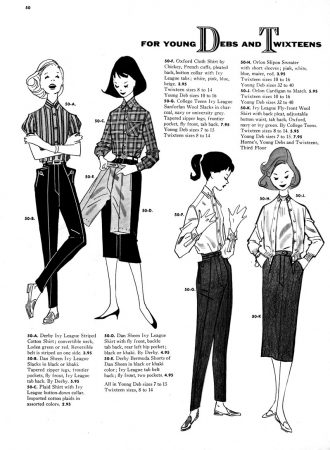 Twixteen: a nice portmanteau which has utterly vanished from everyday language. “Tween” would seem to be closest modern equivalent, but skimpier and less elegant – rather like 21st century teenage fashion, come to think of it. “Debs” aren't visible much anymore either.

But in both photos and the illustrations, these are charming mid-century debs and twixteens, seemingly straight out of black and white television sitcoms. These are wonderful '50s era illustrations of elfin, self-assured young women. The Horne Christmas catalog is filled with classic original mid-century artwork like this.  Some of the girls on these pages may be wearing pants, but the hairstyles and fashions have become as dated in their way as bustles or hobbleskirts. 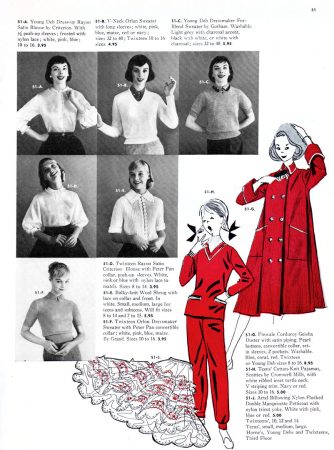 Joseph Horne was one of those mighty regional department stores that so dominated American shopping for over a century. Once upon a time every big city could boast of an important store or two which became deeply intertwined with the city's life: Horne's was Pittsburg's big retailer from 1849 until the mid 1990s. Their downtown cathedral of commerce still remains but now is home to an insurance company. One wonders if the folks now working on the third floor ever realize they are sharing their space with the ghosts of young debs and “twixteens.”