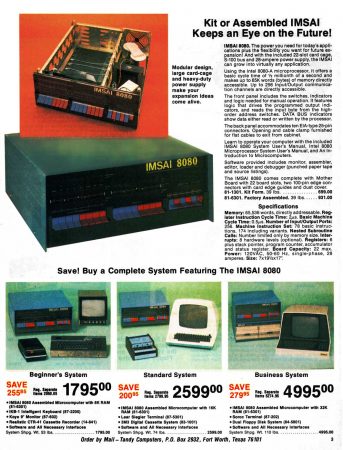 Before Apple Stores, there were Radio Shack Computer Centers.

And before Radio Shack Computer Centers (of which there once were hundreds), there was a single store in the basement of Tandy headquarters in Fort Worth Texas, where Tandy started experimenting with selling computer gear. And they released a single Tandy Computer Catalog, from which this rare page was scanned.

What a snapshot of a moment this is, for both Tandy and personal computing. Radio Shack was, of course, a force in electronics catalogs for 8 decades, so naturally they would issue a computing-only catalog. And at this moment they were just discovering that they could sell their own brand of computer – the TRS-80. But the “Trash 80” only occupied a few pages in the Tandy Computer Catalog. The rest was filled with nearly every other important bit of computer hardware that was available as 1977 ticked over to 1978 — page after page of now long-gone and little-remembered brand names. One of the biggest (just briefly) was IMSAI, whose personal computer gained national recognition when it had a key role in the 1983 hacker movie “WarGames“.

1978 was also a moment for disco music, for what that’s worth. Disco, like cassette storage, floppy disks, TRS-80 & IMSAI computers, Radio Shack and everything sold in this catalog is now ancient history.