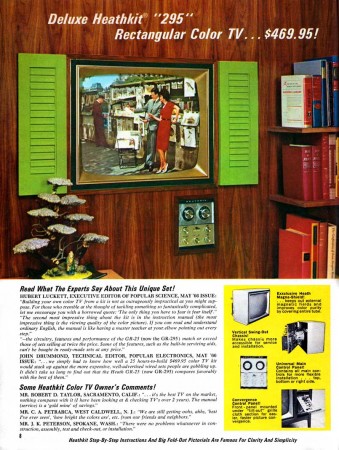 In the 1950s, 60s, and even 70s, lots of men (invariably men) were encouraged to hone their hobbyist “Do It Yourself” skills. Heathkits were the pinnacle of DIY in electronics – at the forefront of what we now call the “maker” movement. There were all sorts of Heathkits — ham radios especially, but everything from test equipment, oscilloscopes, an early analog computer (in the 1950s!) , and even an early robot and a PDP-8 minicomputer.

And television sets. Heathkit claimed you could built this set with complete confidence in 25 hours — a couple hours a night over a couple of weeks. You’d save money and end up understanding all sorts of useful things about television circuitry…and you could build it right into the wall for a really impressive custom setup as pictured here

– although you needed over 20 inches of space BEHIND the wall, which undoubtably limited these sorts of installations. In-wall installation probably added considerably to the 25 hour build time, but in the end you’d have a color TV that would be the talk of the neighborhood.

Got the TV assembled? Good! Move straight on from that to a Heathkit electronic organ — build it only in 50 hours.