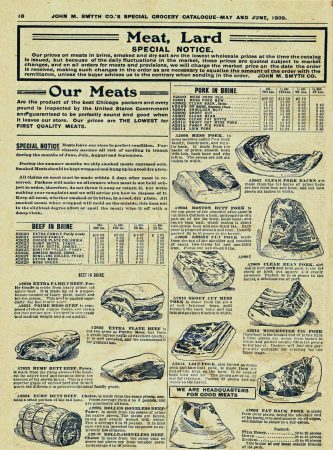 Stated more accurately, Meat by Rail. John B Smyth was a Chicago wholesaler of food and provisions. Basically, they sold nearly everything you would need to stock a turn-of-the-20th-century general store. They offered all kinds of tinned foods, teas, cigars, chocolates, soaps, dried fruits, housewares, shoe polish – it’s all in here. Even meats.

The cuts of beef and pork shown on this page were shipped to retailers via rail from of Chicago. Prices listed are wholesale. 200 pounds of “Fancy Rump Butts” cost the grocer $14.25. (Try saying “Rump Butt Beef” three times quickly, by the way.) According to the freight rate table at the front of the catalog, 200 lbs of goods could be shipped via “4th class rail” to, let’s say, Guthrie Oklahoma for 1 dollar and 78 cents. Shipping costs have risen a bit since 1909. 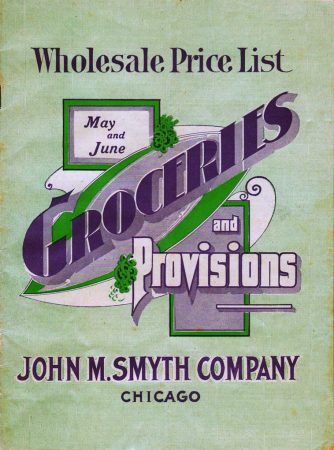 Beef in Brine may not sound too appealing, but it kept the meat from spoiling on the trip. Well, usually – zoom in to read the disclaimer that “purchasers assume all risk of spoiling in transit during the months of June, July, August and September.” Smoked Meats (including Armour smoked ham) were also available, all “perfectly sound and good when it leaves our store.” One could wish for a somewhat more enthusiastic description.