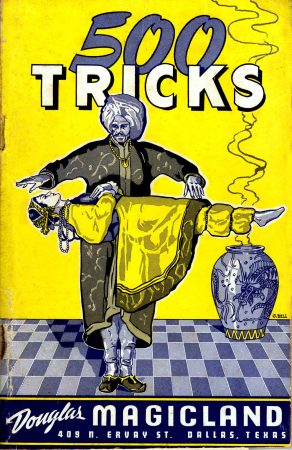 As if by magic, a young fellow suddenly finds fame and admiration, thanks to a few card tricks made possible by a deck of cards. Life changing? According to the copywriter, yes!

The Douglas brothers opened a store in Dallas about 1911, and Magicland became a destination for nearly 95 years – operating mostly in a old downtown storefront. But even more than the store, it was the Douglas Magicland catalog of “500 Tricks” which achieved iconic status among professional magicians — and kids who dreamed of becoming magicians — for decades. That cover artwork remained unchanged for decades, and why should it? It was exotic as hell, promising all sorts of fantasies fulfilled inside. 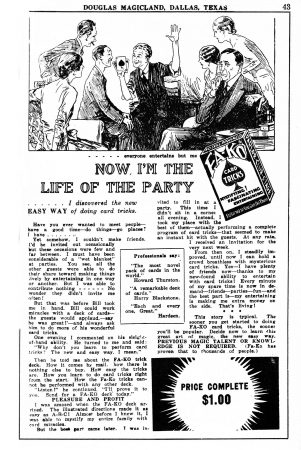 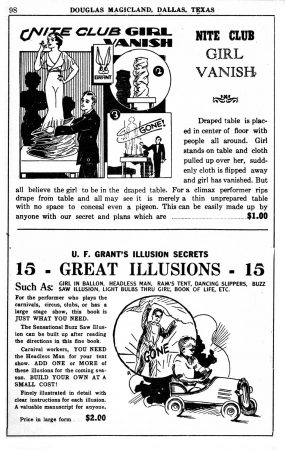 — including the fantasy of becoming popular. The promotion of the trick on Page 43 was directly inspired by a famous 1927 magazine ad “They Laughed When I Sat Down at the Piano – But When I Started to Play! –“ by legendary advertising copywriter John Caples, which convinced thousands of people to take piano lessons. Perhaps a trick card deck card could start you a path to popularity just as easily. With a dollar and some practice you’d make new friends; impress the girls. (Click to zoom in and read the compelling copy.)

Perhaps you could even turn it into a career. You might become a fancy nightclub magician, with a sophisticated and lovely assistant whom you could vanish in an instant, from a table that had “no space to conceal even a pigeon!”

Such were the fantasies promised in the Douglas Magicland catalog. They hooked this author as well as many other young boys.

One lad who visited Douglas Magicland in the 1940s was dedicated enough to end up working there, indeed impressing the customers with his quick patter and clever conjuring. He wooed and won a local airline stewardess who then became his assistant; and went on to fame and fortune hosting magic on national television; and inspired countless other young men to work on their card tricks. His name was Mark Wilson; his assistant, the lovely Nani Darnell.

The great Mark Wilson passed away last month at age 91. 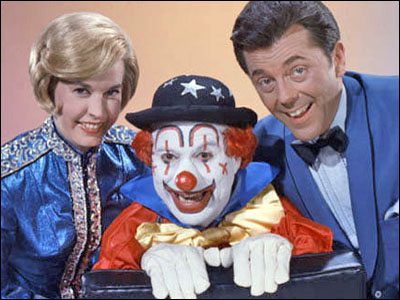