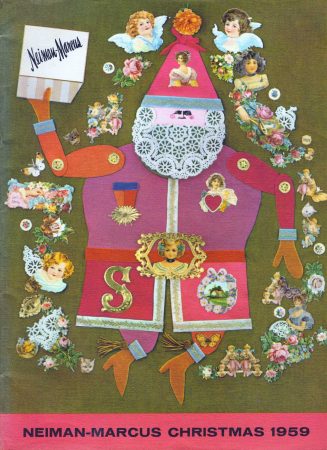 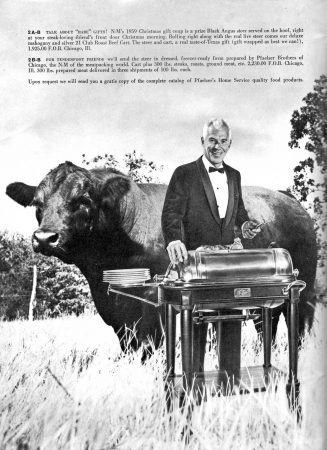 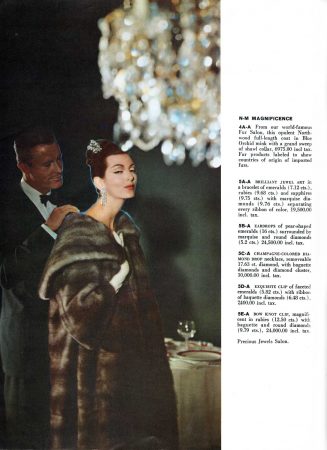 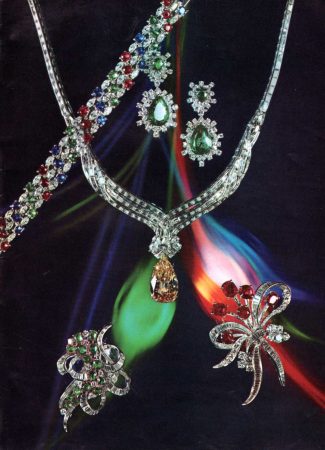 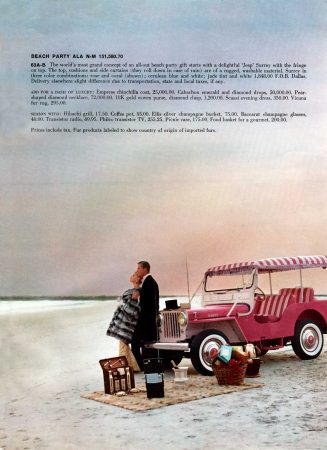 NM’s Christmas catalogs are celebrated for their outlandish “His and Her” offerings and their “fantasy gifts.” Their first such stunt appeared in this 1959 holiday catalog.

Stanley Marcus had been overseeing company Christmas catalogs since the 1920s, but in 1950s the mystique of larger-than-life Texas was growing in the public eye. How to match that perception? Beef! Offer it still on the hoof, or already butchered – your choice (in 3 shipments of 100 pounds each.)

This was the gift that set tongues (although not beef tongues) wagging, and which has led to six decades of outlandish ideas for that special (and wealthy) person who has everything.

But the “rare” gift was hardly the most expensive item in the 1959 Neiman-Marcus catalog. A few pages later you were presented with fur coats and jewelry, modeled by a pair so lushly, slickly mid-century as to look just like mannequins. The jewels, admittedly pretty fantastic, ran to tens of thousands of dollars.

And on the inside back cover, a “Beach Party a la N-M.” The charming pink Jeep was $1800. The portable (transistorized!) TV a mere $255. Once again, it was the fur coat, the earrings, and the diamond necklace that were the real expenses. But what’s with the tuxedo for the third time? And a top hat – on the beach? Those crazy Texans!

Adding everything together, this party for two would set you back $151,580.70 – in 1959 dollars. Now maybe Mr. Stanley wouldn’t quibble about the 70 cents, but a real Texan would be magnanimous and probably tip him one of his spare oil wells.