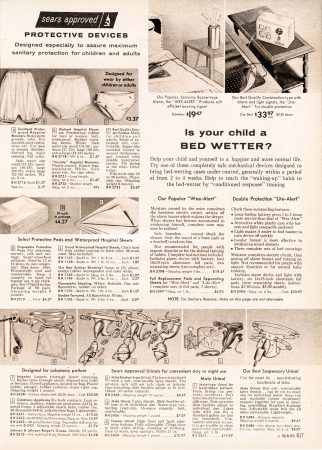 Once again we see there was nothing Sears didn’t used to sell.

At first I thought this was a kind of early baby monitor, but actually it’s something simpler and perhaps a bit spookier. The child wets the bed. The alarm goes off. The child wakes up. The child starts crying. The parent wakes up and cleans up. The idea is that after a few weeks of this the child learns to hold it or to wake up BEFORE an accident happens.

This is Pavlovian learning. To be more accurate, this is operant condition in the style of B. F. Skinner. Skinner’s theories of positive and negative reinforcement were all the rage in the 1950s. In fact he invented a somewhat more Draconian device called the “Air Crib” – a kind of glorified animal pen into which you would stuff your baby. Not really as bad as that description sounds, it was still controversial and never took off. But devices like the Wee Alert and Lite Alert were clearly inspired by Skinnerian theories:
https://www.snopes.com/fact-check/one-man-and-a-baby-box/

Considering it only conditioned one behavior, they were kid of pricey. The Lite Alert came to $300 in today’s dollars. But what price can you put on a bed-wetting cure? Adults who suffered from the problem were offered other solutions, which although they look rather tortuous, are not dissimilar to items you can buy today – but not from a Sears catalog. 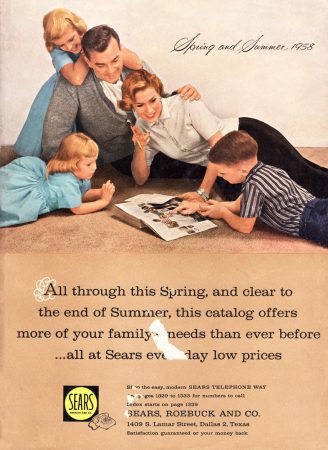 PS: It’s hard to imagine that any members of the nuclear family on the catalog EVER had any problems in this area.