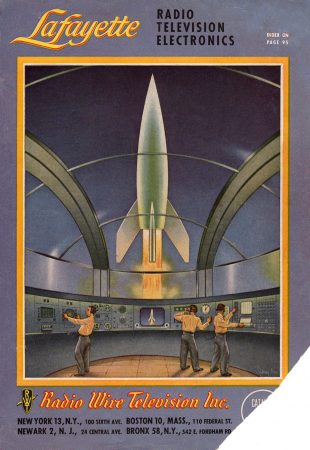 I just love this 1951 catalog cover. Who cares what’s inside — if you’re going to put a spaceship on the cover with scientists inside the Mission Control (apparently just a few feet from the rocket) controlling the launch with clipboards, I’ve already bought into it. Destination Moon, here we come!

That artwork is worthy of any mid-century sci-fi magazine. There’s a small signature at lower right, which appears to read “Sidney Drue,” but I can’t find any information on that name. Anyone have any info on him?

Meanwhile, inside this Lafayette Electronics are products from (or at least FOR) the future – the latest technology for the nascent hi-fi buff or electronics tinkerer. Lafayette was competing with Radio Shack to supply A/V and electronic enthusiasts with all their needs. 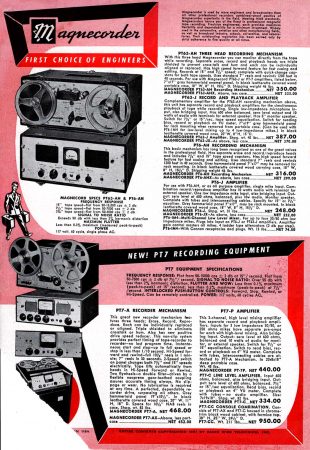 Inside the front cover you have that new marvel – Tape Recorders. The roots of magnetic recording went back to the teens, but it was only after World War II when The allies brought back captured German tape recorders that the concept took off in the US – and fast. Magnecorder was just behind Ampex as popular early brand. “Maggies” were popular in radio stations across the country in the 1950s. 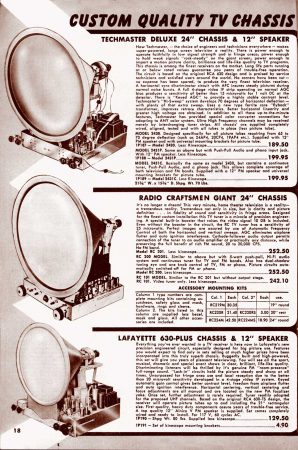 A few pages later come television sets — “Giant” screen sets promising “tremendous reality (and) picture definition” which you could custom-mount into the wall (or a cabinet, since these were several feet deep!) Mind you, in 1951, “giant” meant a 24″ diagonal black-and-white picture. It cost $240 in 1951 dollars — and you purchased the picture tube SEPARATELY!

What’s available in Best Buy these days? 80″? Larger? Nearly 60 years later, the smallest TV you can buy is 24″ – and it can run less than $80 bucks. You may laugh at these old “bargains” today, but when you next visit Best Buy, remember that it all sprung from catalogs like these. Technology from the future, indeed.