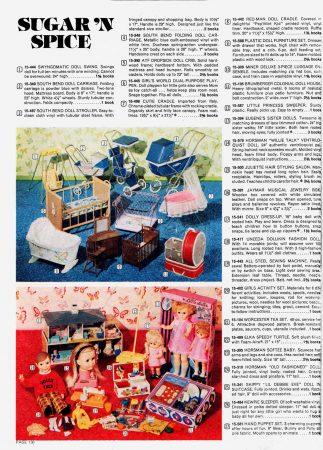 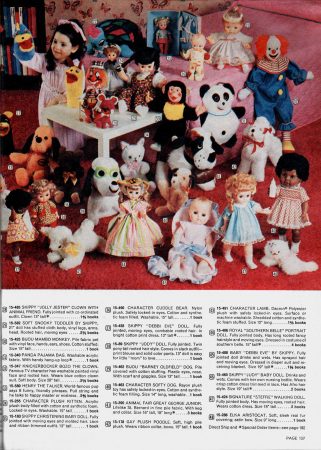 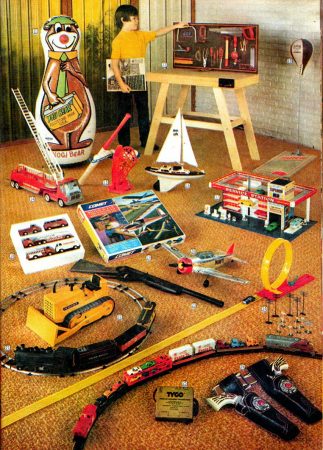 Look closely (click the picture to zoom in) at the “Willie Talk” ventriloquist dummy and the disembodied “Juliette Hair Styling Salon” — do you think just maybe the “Toy Story” movie folks may have found a little inspiration here, huh? There’s some nightmare fodder in that pair.

The 1973 Top Value Stamps book was retrograde all the way. The “Women’s Lib” movement was well underway but you won’t see evidence of it here. It’s all “Sugar ‘n’ Spice”, unembarrassingly so. Posed in the middle of the crowded collection of dolls is a real live girl. She’s the one without a product number posted next to her. So she’s not Debbi Eve, or Jody, or Henry the Talker, or Judy, or Steffie, or Bozo the Clown or Soft Snooky Toddler, or the stuffed animals. She’s just an unnamed girl who today is probably a grandmother in her early 50s.

And when it wasn’t about dolls, it was about housekeeping and babies, hair and makeup.

Two pages later the boys’ toys are equally gender-cliched, and also behind the times. C’mon, it’s the 70s folks – disco and computers are just a couple years away! But here we’re looking at trains and cap pistols and full-service gas stations and propellor planes and Yogi Bear who only existed in reruns. Yes, the kind is rocking some groovy sideburns, but he’s surrounded by toys his dad would have wanted.

Of course, just like in the “Toy Story” movies, any of these items that outlived their owners and survived today would fetch a pretty penny in an antique store — far more than the one or two books of trading stamps you would have redeemed in 1973. There’s a moral to this story, but I’ll be damned if I know what it is.