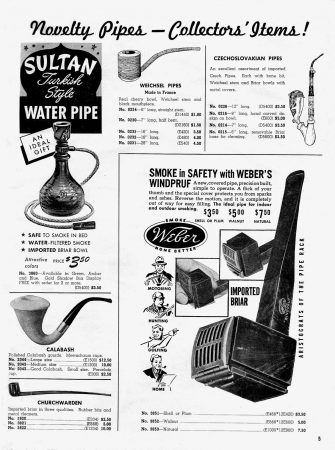 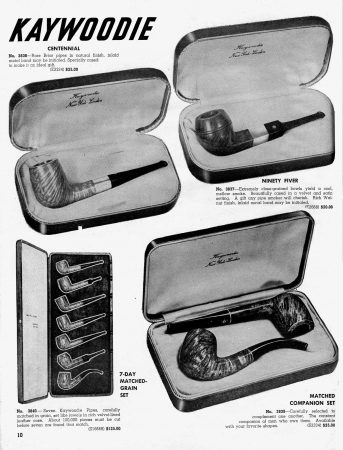 There was a time when pipe-smoking was as popular as vaping seems to be is now. Your local drugstore would carry a nice selection of pipes and tobaccos, purchased perhaps through a wholesaler like Ivan Ries.

My family were never smokers of any kind; I can’t recall my father or grandfather ever smoking. (Mind you, there was one uncle with cigars…) But for many men pipes in the 1940s and 1950s were a big deal. Heck, even Einstein smoked one. Probably not a hookah, or the ridiculously-extended Churchwarden. He might have appreciated scientific logic behind the “Weber’s Windpruf”, although stylistically it looked more like a basement heater or exotic kitchen spice grater. While they may claim it’s good for driving or golfing, on the whole, these are novelty pipes indeed, not meant for daily smokers.

Perhaps Einstein would have gravitated to something like one of the Kaywoodie pipes pictured on a subsequent page. Kaywoodies were premium pipes with retail prices as high as $25 (1948) dollars. You could get a presumably serviceable pipe elsewhere in the catalog for $1.50. These were the kind of pipes that My Three Sons would have bought their father, because Father Knows Best about things like smoking.

By the way, Einstein’s doctor told him to give up smoking, and he did. Smart man. Wonder what he would have thought about vaping?