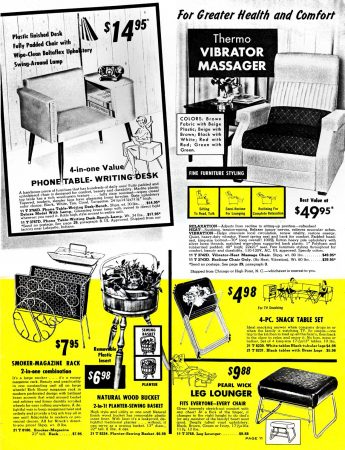 Looking at this Niresk catalog, I’m reminded of the late comic George Carlin’s genius observations on “stuff”, how we accumulate it and carry it with us and let it define us. “This is my stuff, that’s your stuff, that’ll be his stuff over there. That’s all your house is – a place to keep your stuff. If you didn’t have so much stuff, you wouldn’t need a house. You could just walk around all the time. A house is just a pile of stuff with a cover on it.”

Most of the stuff in this 1960 Niresk catalog is, just…well…cheap stuff. Nothing more, nothing less.

Products are stuffed into pages fairly ungraciously. And this stuff has stuff stuffed into it, no less. No better example than the awkwardly contemporary 4-in-one Phone Table/Writing Desk/Bench….with Lamp featuring a “Marlite” plastic-top table that looks like woodgrain. The vinyl padded seat part came in ’60s colors including coral and turquoise. A bargain at $17.95. 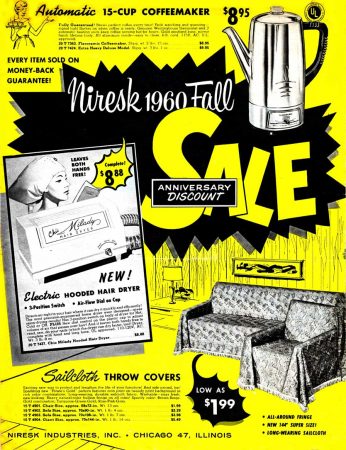 Nearly everything on this page seems to be pulling double or triple duty. It’s a leg lounger that adjusts the height and angle! It’s not just a chair, it’s a thermo/Vibrator/Massager chair that also heats AND reclines! It’s not just a magazine rack, it’s a 2-in-one magazine rack/ashtray combination! It’s a planter AND a sewing basket! (It’s starting to sound like an infomercial!)

It’s just a whole lotta stuff, from the heart of the the consumer age.