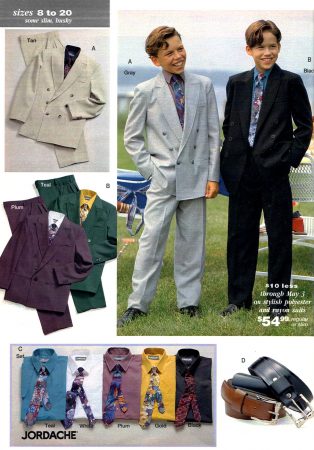 Step back 25 years. These boys’ outfits look like something out of an old TV sitcom. Once again I find myself asking, did we really dress this way? This recently? (With those ties?) I don’t remember the ’90s being so colorful, but page after page of this 1993 catalog has children, women, and men outfitted in bright fluorescent colors. Maybe these are the after effects of the “Miami Vice” era; 25 years later, they look as dated as an Edwardian corset.

These pages are from the very last Sears “Big Book” catalog from the spring/summer of 1993. Hard to believe they stopped printing general catalogs at that point, right at their 100th anniversary. (Sears did continue to print specialty catalogs and even – rumor has it – brought back the Christmas Wish book last year, although I never found one.) 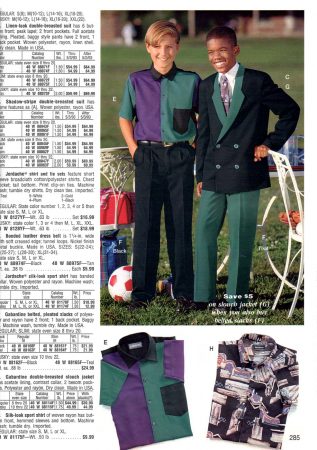 It’s hard to overstate how important Sears was to American shopping in the 20th century, bringing so much choice and innovation to American consumers. Even in the early 1990s Sears was experimenting as online pioneer, one of the co-creators of the pre-Internet “Prodigy” online service. It’s hard to believe Sears hasn’t been able to find a role and change with the times, but after 125 years there’s more no room for big catalogs or big stores. Amazon is the new Sears. Different times, different tastes, different strokes.

I wonder what will happen to Amazon in 25 years?