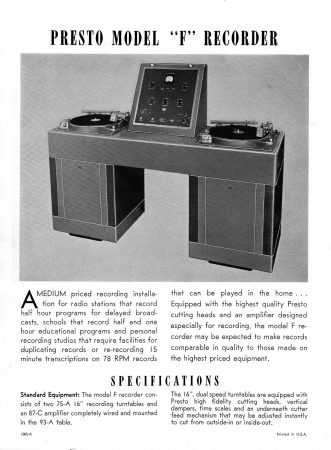 You could be forgiven for thinking this looks like a mad scientist’s industrial-strength DJ mixing console. You wouldn’t be far off.

In 1940, the technology of making recordings was a far cry from the pocket-sized-multi-channel-nearly-unlimited-capacity digital gadgets we have now. Any iPhone can be a high quality audio recorder today, but 80 years ago the only recording medium was…actual records. These were black discs up to 16″ in diameter, which used a highly modified turntable (often called a recording lathe) to literally cut a groove in the blank laquer disc.

The Presto Model F was a “medium priced recording studio” consisting of a 2-input Mike mixer and two recording turntables. Two were needed if you wanted to make recordings longer than 15 minutes (which was as much as you could fit on one side of those 16″ discs) or if you wanted to make copies of a record. Presto’s definition of medium-priced was $1,075…in 1940 dollars. 16″ blank disks (recordable only once) cost $2 each. 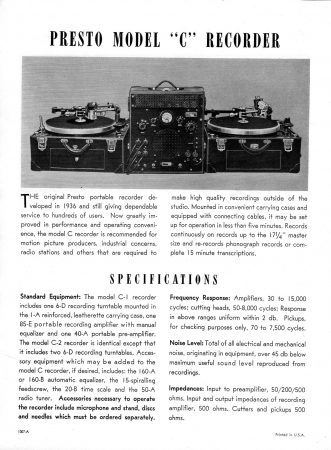 For portable use, Presto offered a model “C” with either one or two recording turntables. Two are pictured here, each weighing 67 pounds. The amp in the center weighs 53 pounds. With two recording lathes, total price: $1,219. If you’ve ever heard the recording of the dirigible Hindenburg crashing, crashing terrible to earth, it was made using a setup like this. In the days of the big bands, recording required serious effort and investment. Remember that, the next time you whip out your mobile phone to record – or even play back – a bit of music.