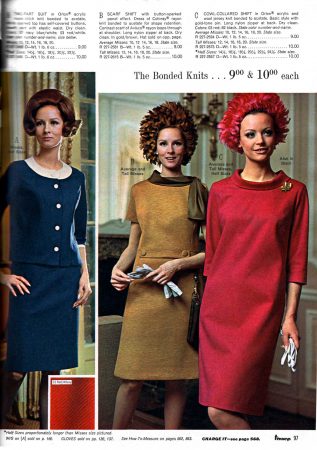 The 1960s certainly show their share of…”interesting” fashion statements, as designers tried to incorporate the decade’s informality and youth orientation into clothes and hair. Some things made the grade. Others, not so much.

From a gigantically thick Penney’s catalog comes this example of the not-so-much: two quite-reasonable Orlon dresses, topped with feathered hats which make the models look like the Pan Am stewardesses from the “2001” (released in 1968), except they work for a lower-budget airlines that didn’t fly quite to the moon. But you know – feathers, flight – right?

They sure are big. But it was an era of Big Hair (except for those natural-woman hippies) and Penneys’ offered human hair wigs that added serious inches to a girl’s height. Wigs came in three quality levels (and prices from $39 to $129!), which does lead one to wonder about the difference was between them. They all used real human hair — so is there worse and better hair? 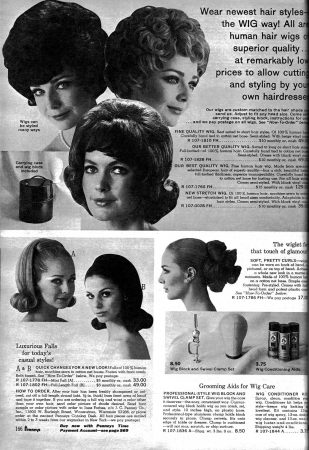 Back on the color page, in small print, they note that the model in blue (looking a bit like First Lady Pat Nixon ) is wearing one of those Penney’s wigs.

Penney’s was definitely trying for a young shopper in 1968. There’s more good stuff in this particular catalog. So stay tuned. We’ll be back before you can sit through a full viewing of “2001”.