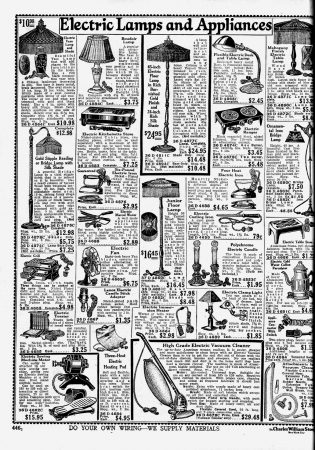 In 1925 the Charles Williams Stores could put everything that plugged into an electrical outlet onto a single page of their annual catalog – one page out of 538. That’s all they needed.

And most of those items were lamps, including “Polychrome Electric Candles” and the “Electric Candlestick Adapter,” which kinda sound like 1960s rock bands.

But you could also get a fan, a toaster, an iron, a hot water heater and a vacuum cleaner – the height of modernity and fairly recognizable to us today. The “Electric Grill” is a particularly clever device (if unsafe by today’s standards)  that could heat three different foods at once — above, below, and in-between the heating wires.

Zoom in close and you’ll see that all the items are pictured with an adapter that allowed you plug the appliance into a lamp socket, since in most homes plugs were scarce and multi-tap outlet adapters hadn’t really been invented yet.

You could get a motor for your treadle sewing machine, but you will find no radios here, since in 1925 there were no AC-powered sets — all radios were powered by large batteries. That would change in another year or two, and would lead to a march of elecTRONIC devices – not merely electric – that accompany our lives today.