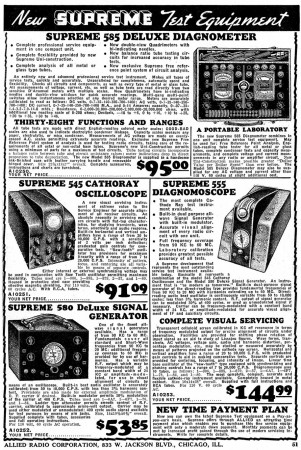 The Diagnomoscope: what a great name for, well, whatever this gadget is. Sounds like something out of an early science fiction movie. (Looks like it, too, all streamlined curves like a 1930’s automobile hood.) In fact it’s radio test equipment, suitable for serious radio technicians to diagnose problems with receivers or transmitters, or to assist in developing new ones, from an era when this was purely a hardware problem. 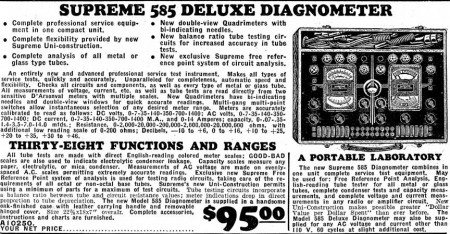 Supreme’s Diagnometer is a fancy tube tester. Radio tubes predated transistors which predated integrated circuitry. A good radio might have 12 or more tubes in it, each with finite lives. Tubes could burn out and need replacing at any time, so tube testers were once ubiquitous. Even local 7/11 stores carried self-service tube testers and common replacement tubes, but a good serviceman could do a better job than you.

But back to the Diagnomoscope. If you zoom in, there’s a lot of technical copy to digest. But the real Flash Gordon aspect to it was the little built-in cathode-ray-tube screen which would display waveforms of whatever signals were being sent to it.

In 1937, a cathode ray tube was extremely expensive and very high tech. Scientists were just working out a new use for these devices: displaying pictures sent via radio waves — something they called television.