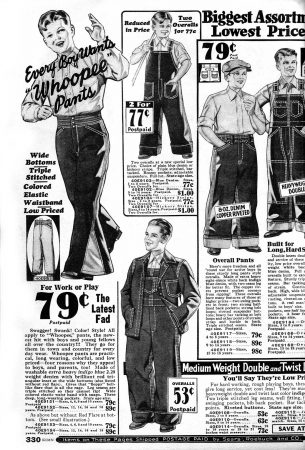 Every Boy Wants “Whoopee” Pants, the headline says. But do they really? Did they, in 1931? As Inigo Montoya said, “That word – I do not think it means what you think it means.” That word “whoopee” was certainly current in 1931, thanks to a 1928 Broadway musical that spawned the hit song “Making Whoopee” and a subsequent 1930 movie musical.

In 1931, at the nadir of the Depression, perhaps a pair of wide-bottomed trousers was exactly what boys were looking for. According to Sears it was the latest fad, promising swagger! swank! color! style! In reality, whoopee pants appear to be early mutant bell-bottoms, with a triangle of red cloth sewn into the bottoms to flare out.

If that’s too much, you could get Whoopee pants without the flared bottoms — but where’s the swagger, swank, color and style in that?