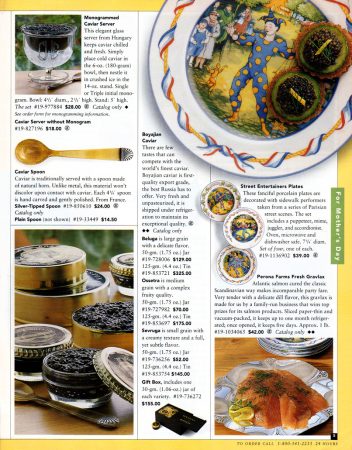 Williams-Sonoma: A Catalog for Cooks, May 1997

Here we are almost at the end of the 20th century, and mail order catalogs are in decline. The all-encompassing generalists are hurting: Sears had dropped their Big Book 4 years earlier; Montgomery Ward had stopped sending out catalogs in 1985. J.C. Penney would hang on for another decade or so.

In 1997 the action in mail order was found in specialty retailers, of which there’s hardly a better example than Williams-Sonoma. Founded in 1956, Charles Williams discovered that it’s not about what we need in the kitchen, but what we want. 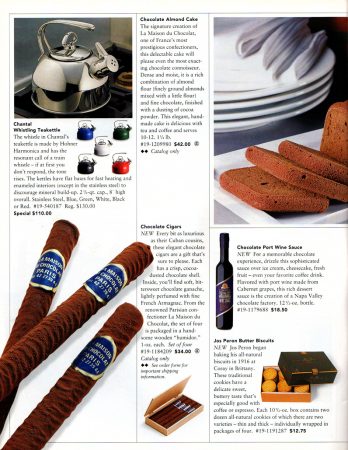 Williams-Sonoma products fit the category we now call “Food Porn” – for example, selling us not just caviar, but three different kinds of caviar. And a monogrammed caviar server. And a “hand-carved, gently-polished” caviar spoon imported from France of animal horn. That’s just the appetizer. By the time you get to dessert, you can settle in with a chocolate cigar – a “crisp, cocoa-dusted chocolate shell” wrapped around “soft, bittersweet chcolate ganache, lightly perfumed with fine French Armagnac.” In their own wooden humidor box. If cigars aren’t your thing (even chocolate ones) then click to zoom in and read about the imported Chocolate Almond Cake or Butter Biscuits.

Not wants, but needs. Just the thing for your Monday weeknight meal. Must be so – Williams-Sonoma is still doing just fine today.