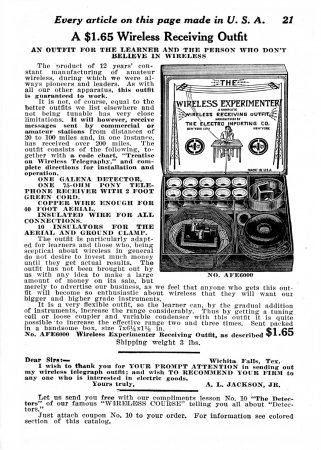 There’s nothing in this hundred-year-old illustration that anyone today would recognize as a radio, but that is in fact what you are looking at. Only the headphone (the round thing in the lower right corner of the box) even remotely resembles its current ancestors. But as we see again and again in catalogs, early technology was often awkward an unrefined. And yet it was also magic.

This catalog is so early in radio’s life that radio wasn’t called “radio” yet – it was just wireless telegraphy and wireless telephony. It even predates the existence of speakers and tubes to amplify the sound, but since the idea of broadcasting wouldn’t take shape for another three or four years, mostly you would have been listening for other experimenters – radio “hackers” we might consider them — sending messages around town without wires. (ignoring that 40 foot antenna which shipped with the set.) 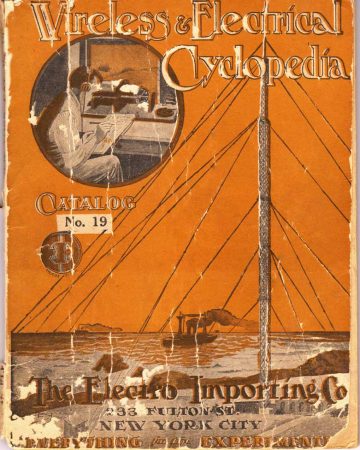 The Electro-Importing Catalog was published by a truly remarkable gentleman, Hugo Gernsback. An American immigrant born in Luxembourg in the 19th century, he became a tireless promoter of electrical and scientific visions of the future – publishing not only the first radio product catalogs, but visionary magazines about television, stories about robotics, and the very first sci-fi magazine “Amazing Stories” among others. (Science fiction’s annual Hugo awards are named for him.) When he died in 1967 — fifty years ago this week — not only had radio advanced unimaginably beyond his earliest fantasies, but we were living in an age which was not merely electric but electronic.