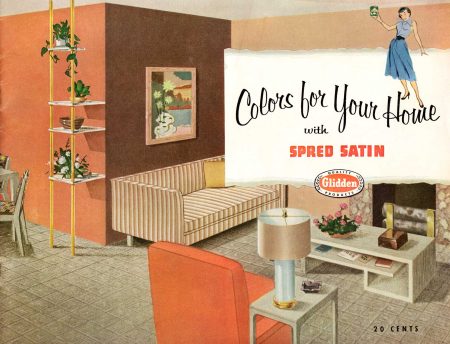 Mid-century modern is not as common in mid-century catalogs as you might expect.

The modernism of 1920s Art Deco shows up all over catalogs of that era, helped along by improvements in printing and production, as full 4-color printing became more common and resulted in exuberant color layouts. The 1930s Depression and 1940s war years were defined by their austerity – black & white or two-color printing, with photographs replacing drawings so the reader had confidence in what they were buying. 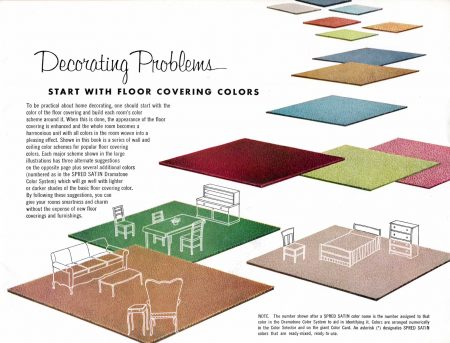 This Glidden catalog is designed to help the housewife with solid ideas on how how to paint her home, during a time when colored walls and ceilings were very much in vogue (at least according to Glidden.) A Niagara Green ceiling and Diamond-colored walls would go well with brown floors, they promised,  and this catalog worked hard to give the homeowner a sense of how things could work in her home. (and it WAS her, by the way. On virtually every spread an artist has sketched in a woman – considering, painting, showing off the new look to hubby.)

No photographs in this catalog! It is all artists’ renditions, and some of it reveals a very very mid-century artistic license indeed. 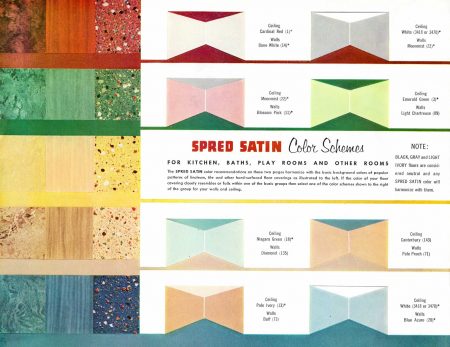