The Brown Fence and Wire Company, 1941 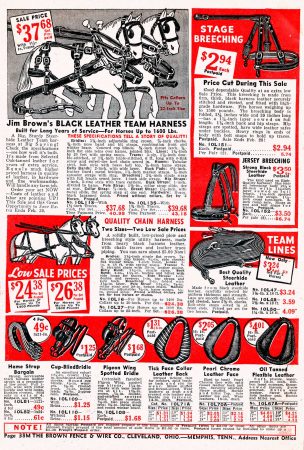 This page is eye-catching as much for the date as for the subject matter. It’s early 1941 — most of the world was at war, and the USA would join before the year was out. At this moment in the 20th century, over half of American farms still didn’t have electricity. And evidently a fair number of them still relied on horses for the heavy work, instead of the horsepower a tractor could offer. We’re looking at the waning years of a way of life that had existed for centuries.

Horse harnesses were just a sidelight in this catalog – the Jim Brown company’s primary products were barbed wire and fencing, but they sold all sorts of farm supplies (including shoes made of horsehide – nothing goes to waste) for decades during the first half of the 20th century. 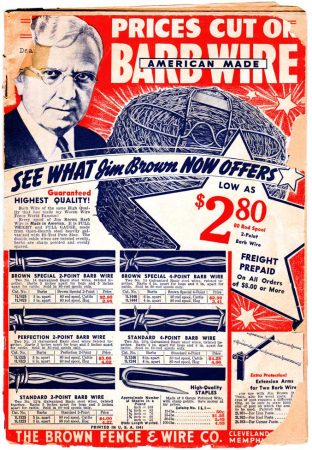 Jim Brown, pictured on the cover, looks like he took his business very seriously. (He did, in fact, have a run-in with the Federal Trade Commission 8 years prior to this, over some dubious advertising claims.)

How, one wonders, did they ship all that barbed wire?