In the middle of the 20th century's Great Depression, Sears Roebuck and Co., the nation's biggest retailer, coined a name for their Christmas catalog: the “Wish Book.” Maybe it was because in 1935 too many families could only wish they could buy all the wonderful things pictured in it's pages. But the name stuck, because we all still wish for those things, first as kids and later as adults. We all wish for the abundance and excitement the catalog promises: the exotic, the fashionable, the surprising, the latest, the coolest, the cheapest, the choices. 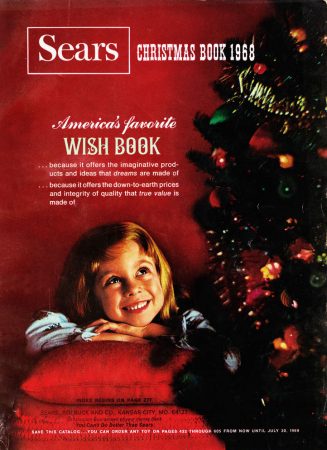 Modern consumer catalogs were a product of the 19th century, made relevant by mass production of goods and cheap and available shipping. When color and photography started augmenting black and white line-cut images, we had a medium perfectly suited to presenting 20th centurary dreams.

And then the Internet happened. In the 21st century, paper catalogs are, like vinyl records and plain telephones, just a shadow of what they once were. Today we shop online, and Amazon's digitally-presented inventory puts the thickest old Montgomery Ward's catalog to shame. Sears no longer prints big catalogs and is practically out of business. (Coincidence? Hmmm…) But throughout the 20th century it was the printed catalog that arrived in your mailbox bursting with products inside that showed the American Consumer just how to consume.