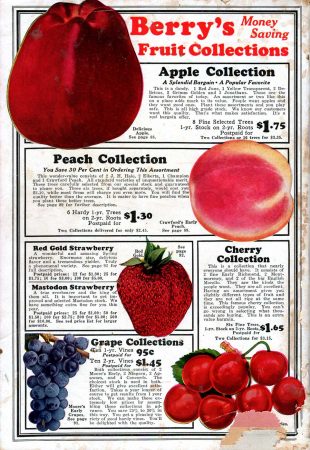 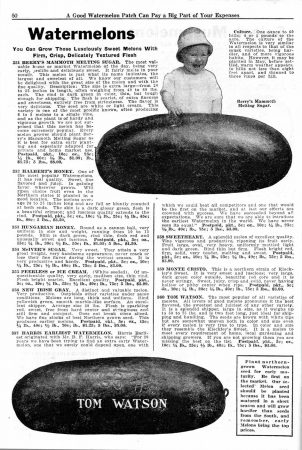 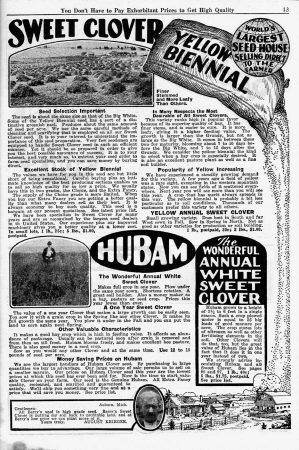 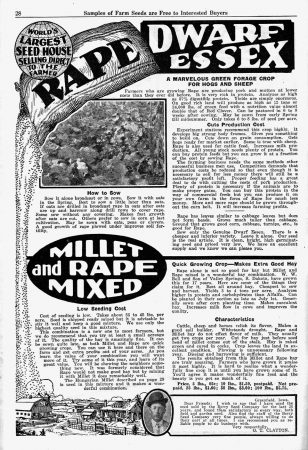 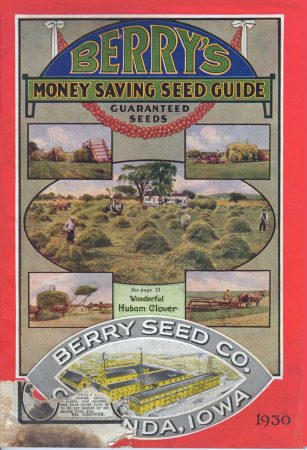 Seed catalogs have been a staple of American catalogs since as long as catalogs have been around. This depression-era example is aimed squarely at the working farmer. While there are a few pages of roses and flowers, this catalog is really focussed on cash crops. With a name like “Berry Seed”, there have to be berries and fruits, and so there are, colorfully displayed on the back cover.

There are also melons, shown in sizes and varieties that would encourage dollar signs to flash before any farm owner’s eyes. Zoom in for the copy describing melons with tempting names like “Melting Sugar,” “Hungarian Honey,” “Ice Cream,” and “Sweetheart.”

Towards the front there are pages, pages, and more pages of clover, which city folks like myself don’t even think of as a crop, until you have livestock to feed.

And then you come to “Dwarf Essex Rape” and your heart skips a beat. In 1930, that word was more familiar as a plant name than as an act. Rapeseed is a relative of turnips and mustard and cabbage, and the origin of the word dates back to the Romans. Rapeseed is edible, but it also produces a vegetable oil that can be used as a lubricant or in cooking. But few people brought it home until Canadian scientists in the 1970s created a variant and dreamed up an entirely new name for it – Canola. Nobody has a problem bringing home a bottom of canola oil.

The Berry Seed mail order farm seed distribution business was founded in 1885 in Clarinda Iowa by A. A. Berry. At one point they were such a large and progressive organization they even owned their own radio station – KSO – which they used as a promotional tool. Now a single distant offshoot ancestor, Berry’s Garden Center and Floral Shop, operates as a storefront in Danville Illinois.